As mentioned in my earlier post Tulum – Eco-Chic Mexican Style Part 1 I have promised to send out and write another entry about more things to do in Tulum Mexico. I believe there are just so many beautiful things to discover in that area that its definitely worth to stay for a longer period of time and really enjoy the magic of Tulum.

One of the attractions that I would highly recommend is to visit the Cenotes. A Cenote, deriving from the Mayan word of ts’onot means well or water pit which is a sinkhole that collapsed and now exposes the groundwater. Around the Yucatan peninsula there are quite a few Cenotes to be found, some very nice ones exactly around the area of Tulum. The two major ones are called “Gran Cenote” and Cenote “Dos Ojos” (two eyes). The one we visited was Dos Ojos and can be found along the main road from Cancun to Tulum. You should definitely rent a car or at least a bike to get there as it is located a bit further into the jungle. 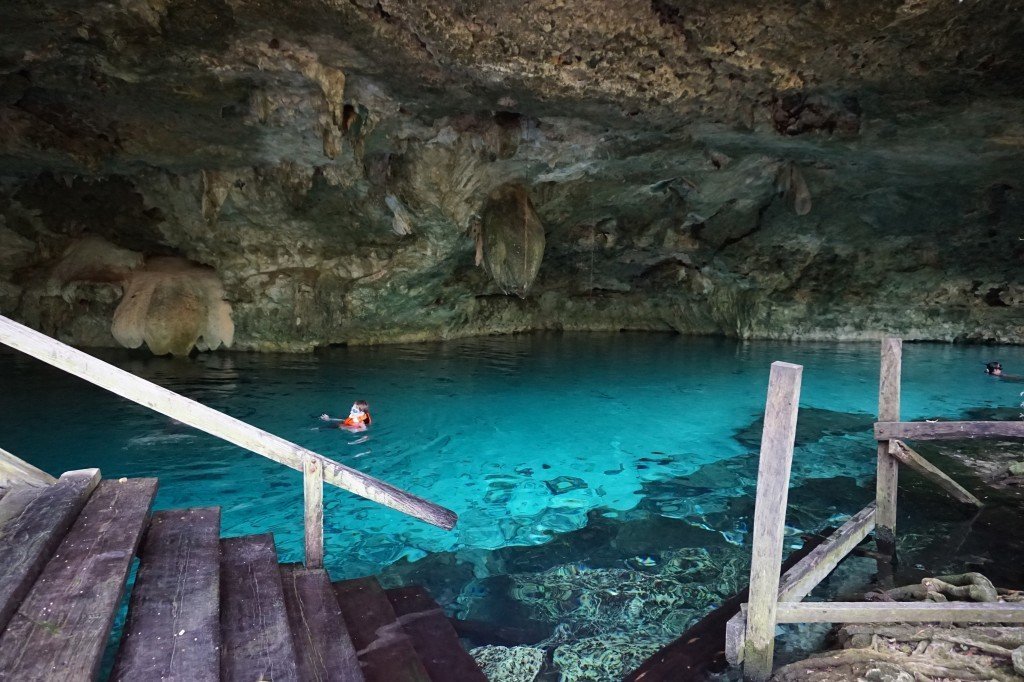 When entering the area you can directly buy your swimming and snorkeling gear or, if you want to dive, go to one of the stores and rent your diving equipment. They offer several guided tours as you cannot go by yourself. I would also recommend to do so as it won’t be much fun to get lost somewhere in the middle of a dark Cenote.

We rented the snorkeling gear and joined a group of around 10 people to discover the depths of the sinkhole. It seems a bit scary at first but when you are guided and equipped with an underwater flashlight it seems better. We swam all the way through the various smaller channels of the Cenote and also had the chance to stop by a cave full of fruit bats. It is a very interesting adventure and one should not be afraid of any animals swimming around in the dark. It is all freshwater and I cannot remember even seeing a single fish down there!The guide takes his time, watches out for everyone and explains everything one should know about the place.

In total a very cool thing to do and quite a different experience and change after all the swimming and beaching along the coast of Tulum. 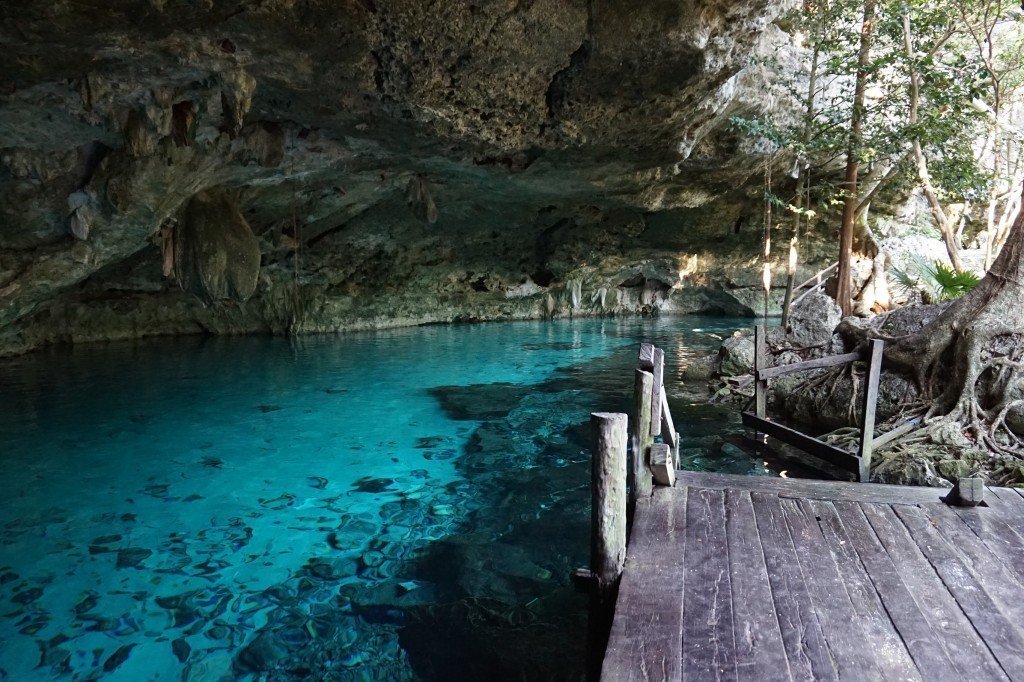 A second very cool trip once being in Tulum is to visit the pyramids of Coba. These pyramids are perhaps not as well known as the pyramids of Chichen Itza but are definitely worth a day trip. I have heard of many being a bit disappointed when visiting the sites of Chichen Itza as everything seems very touristic and overloaded. The pyramids of Coba are much smaller but offer a very interesting insight into what life was like in a Mayan city. Coba is located roughly 40 kilometers away from Tulum and should be visited by car. The site is surrounded by two large lagoons and is made up of different temples, one being actually the tallest on the entire peninsula. The city was once quite large and had a strong economy as it traded with many other Mayan cities, also using the city of Tulum as a major port.

By the way, don’t think of having a small dip in the lagoon as it has crocodiles! 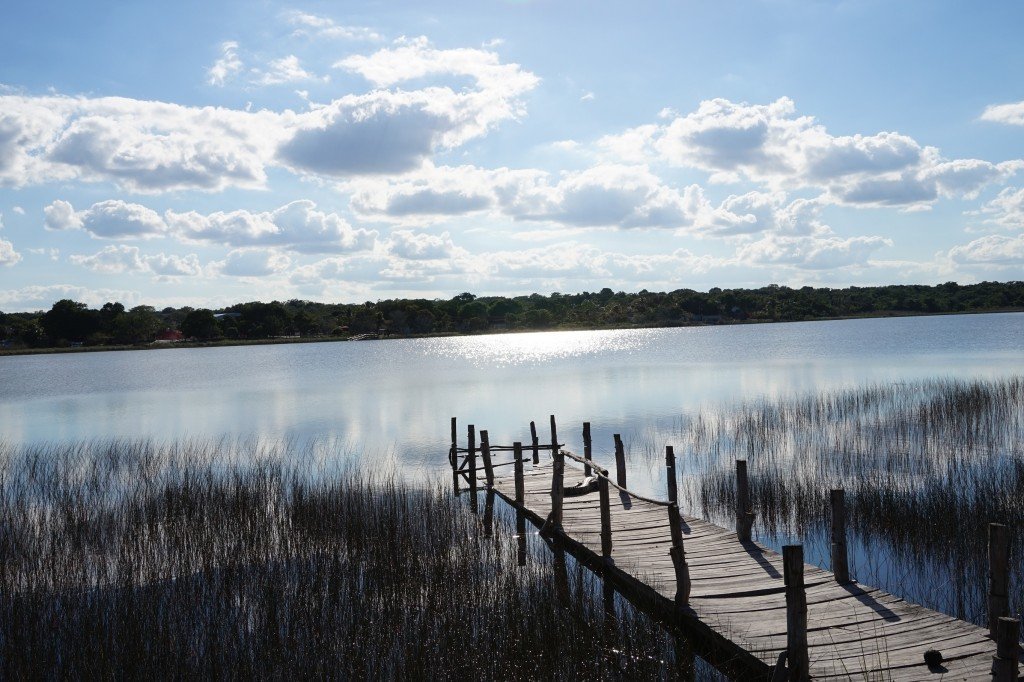 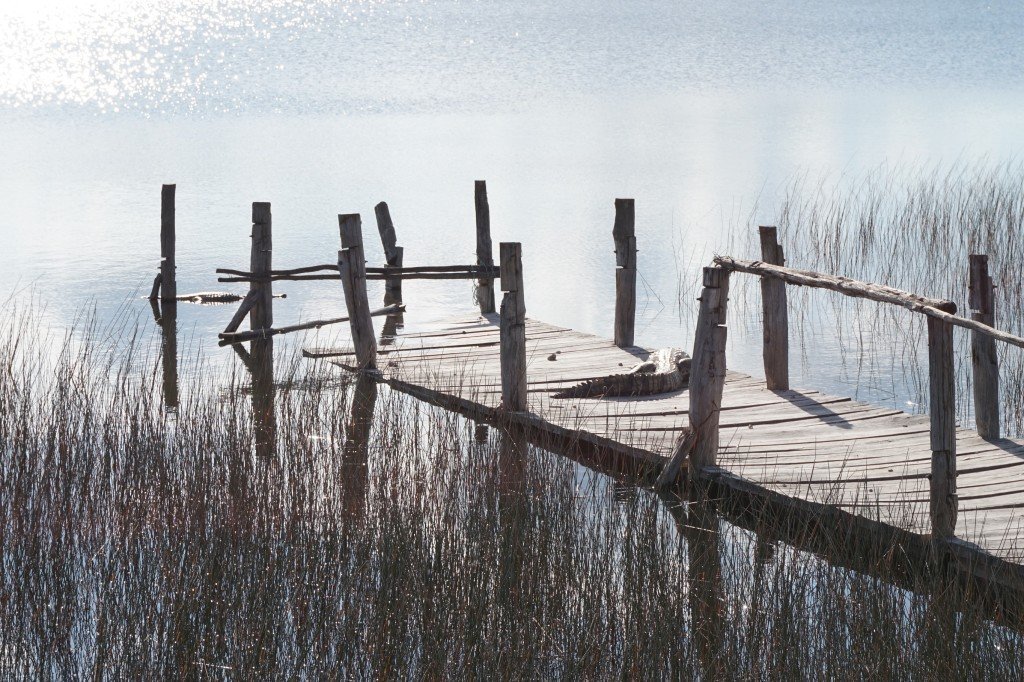 Once having our car parked right outside the site we decided to have a guided tour as there are really many things to be said about this place.

There are still many temples and structures to be seen which shows how big of a city it once was. 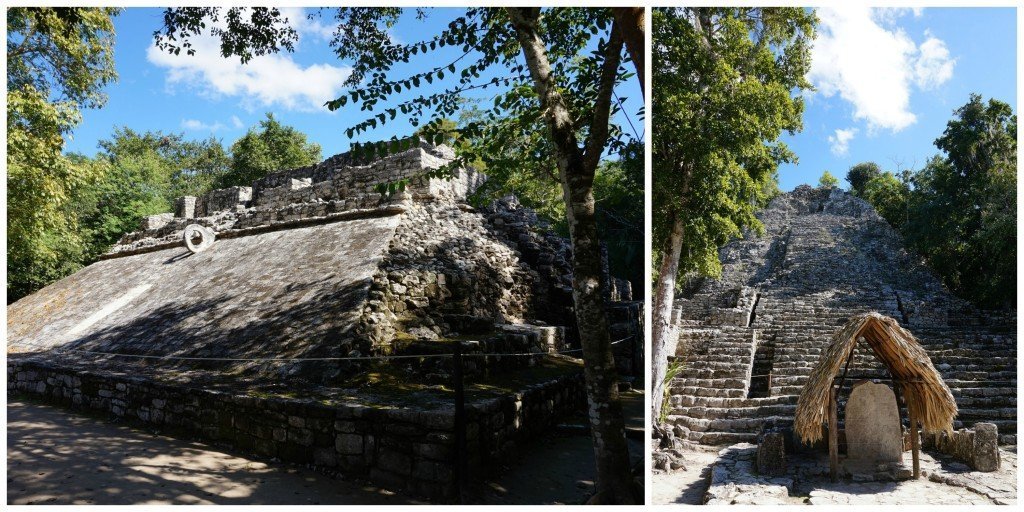 One of the most impressive objects is the largest pyramid called Ixmoja. As already mentioned, it is the largest of its kind on the entire Mexican peninsula and is one the few that can still be climbed by foot. I am not sure how long they will still allow that but I believe it won’t be for much longer. Most impressively is the view you have once you actually managed to climb up all the way. It is very steep, but definitely worth the effort. 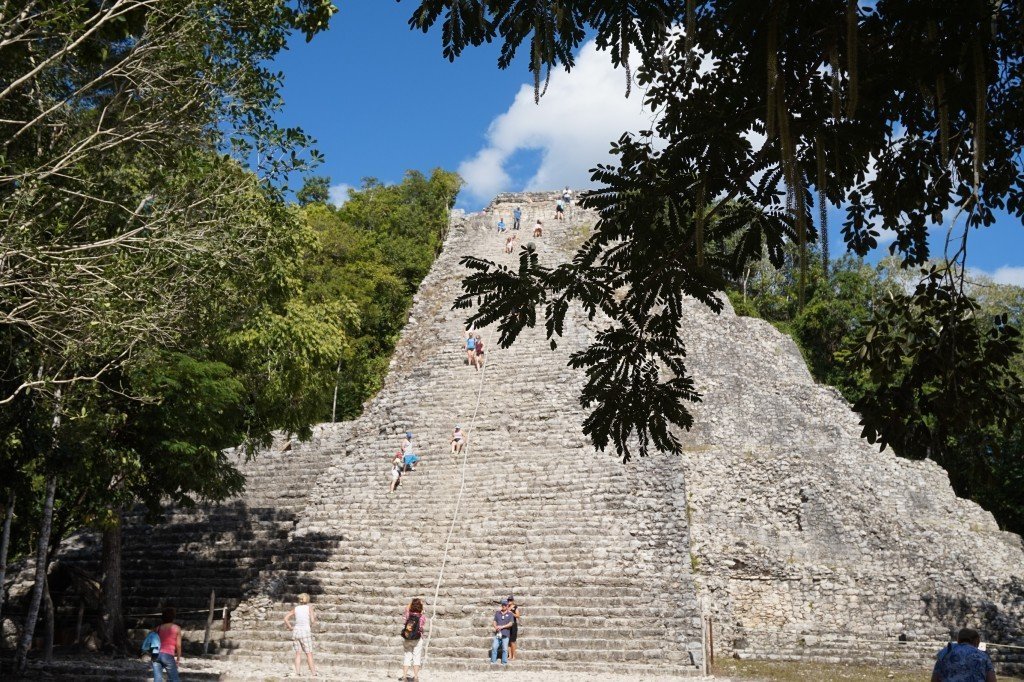 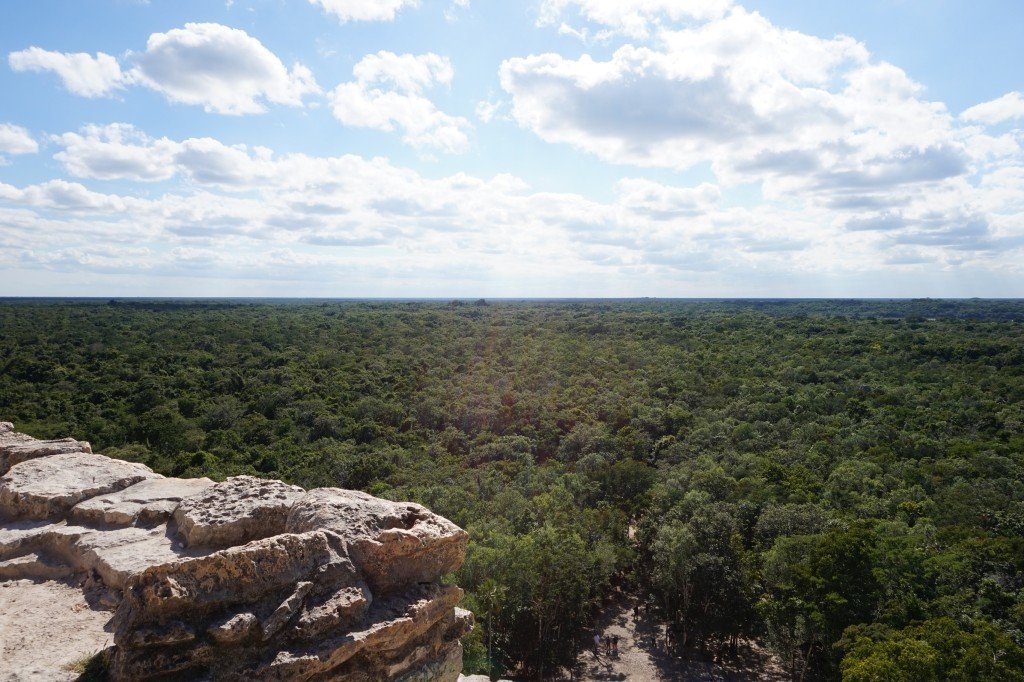 You have a great view across the entire jungle and really cannot see anything else but jungle until the horizon. Just remain up there for a bit and suck up the energy!

As this pyramid is a bit further away from the entrance you also have the option, if feeling tired, to get a ride with a bicycle that offers a comfy ride back for two. 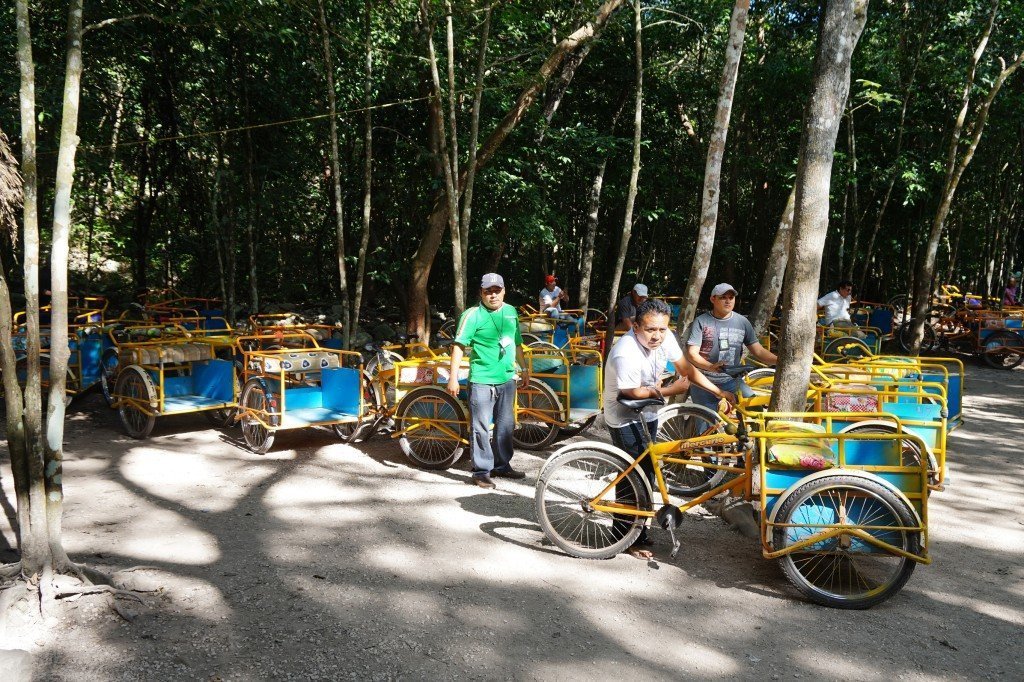 Once again, I would encourage to visit these two places when being in Tulum, especially when looking for a change to the beach life. Highly recommendable to rent a car and travel around and drop by the Cenotes and pyramids. Other things which are also supposed to be nice are the adventure parks of Xel-Há and Xcaret, both to be found up north and down south of Tulum.