Ok, just to clarify this from the very beginning: Mexican food, unlike its common perception, is far from consisting solely of dishes found in typical Tex-Mex restaurants around the globe. Gringo menus and classic foods such as tacos, chili con carne or burritos are somewhat influenced by the Mexican cuisine but are actually either non-existent within the real ‘Mexican food’ or are a commercialized invention to feed tourists. The cuisine is far richer than one might think and we will try to bring you closer to it in this post!

Mexican love food. Food is a crucial component of the Mexican culture and you will experience this while walking down any street across the country. Its exquisite aromas will draw you to one of the various food stalls and restaurants found both in small towns and large cities. During all our travels throughout Mexico, we have experienced loads of different Mexican foods and tastes and really enjoyed every one of them!

Before we indulge into the delicacies of Mexican cuisine I would like to provide you with some general idea of what Mexican food is. The basic component and staple food in Mexico are the Tortillas. These are usually an integral part of any Mexican food dish or served aside to most of the local meals. Unlike its common perception, the traditional Tortillas are made of maize (corn) and not wheat. Wheat tortillas are not as common in Mexico and are mostly found in the north or in the US. Also, the maize Tortillas are usually smaller and hand-made most of the time.

Apart from the Tortilla, you will also find Frijoles de la Olla or Frijoles Refritos to be part of many dishes in Mexico. Frijoles de la Olla are cooked black or red beans, sometimes added with bacon, onions, and sausages (Frijoles Charros). Frijoles Refritos are cooked beans which are then washed and smashed and then fried with various spices. It’s a simple yet delicious accompaniment to many Mexican plates. They can function as the main portion of a meal or serve as a flavorful side dish for different entrees. They also work well as a dip for chips or paired with seasoned meats and other dishes.

An additional, typical component of a Mexican meal is Arroz (rice). Classic, Mexican rice is prepared by sautéing it and then adding either water or chicken broth along with tomato sauce or chopped tomatoes – hence its usual orange and red color.

Not to forget in any Mexican food is the variety of Salsa. The typical salsa sauces are red tomato salsa, green tomato salsa, Pico de Gallo (typical for dipping with chips) and the Ranchera salsa. All of the different types of salsa consist of either charred red or green tomatoes added with cilantro, garlic, and different chilis and are served to pretty much every single meal you will have. In this way, you can spice your food just the way you want to. 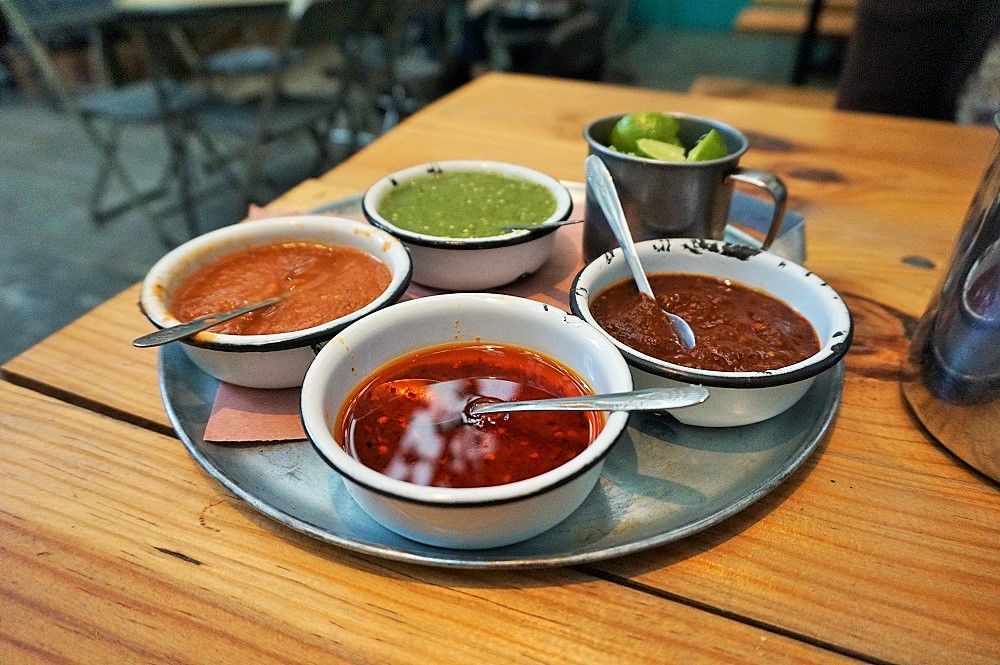 There is a never-ending supply of different Mexican food dishes. Since Mexico is a large country, you will find that every state has its own specialties. We have traveled around the country a bit (still missing loads of areas!) and could put together a long list of dishes that we can recommend trying when visiting. In the following, I have prepared a smaller list of dishes that are considered part of my favoritos!

Cochinita Pibil is a slow-cooked pork meat dish flavored with achiote paste and usually wrapped in Banana leafs. The meat is marinated in an acidic citric juice, making it very soft and tender. The dish is served with corn tortillas, red onions, refried black beans and habanero chilies. It is a very classic dish from the area of Yucatán but can nowadays be found throughout the country.

It is one of my favorite dishes and something that you have to try when visiting Mexico. Obviously, you will find the best versions of Cochinita Pibil in Yucatán. 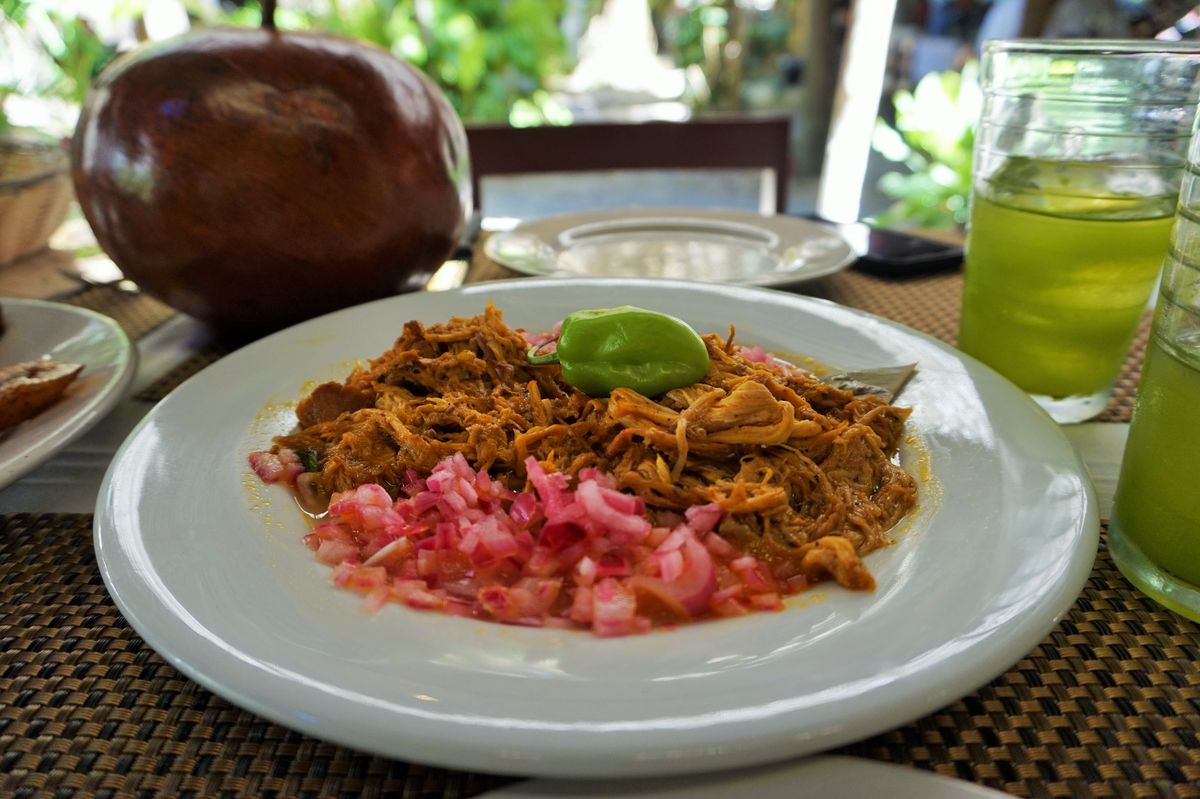 This is a very traditional, Mexican dish that you can find all over Mexico. It consists of cut and slightly fried corn tortillas softened up with either red or green salsa. Sometimes also pulled chicken is added on top. This is then garnished with crema (cream), shredded cheese, onion slices and avocado pieces and served with some re-fried beans on the side. It is a very common dish for breakfast and brunch, also a great dish to cure your hangover.

Rocio absolutely craves this dish! She prefers the red salsa version of it and could eat it on a regular basis. I myself do like it but it is quite a heavy dish and not something you want to have for every breakfast. Yet, it tastes great and is something you must try for a nice brunch when in Mexico. 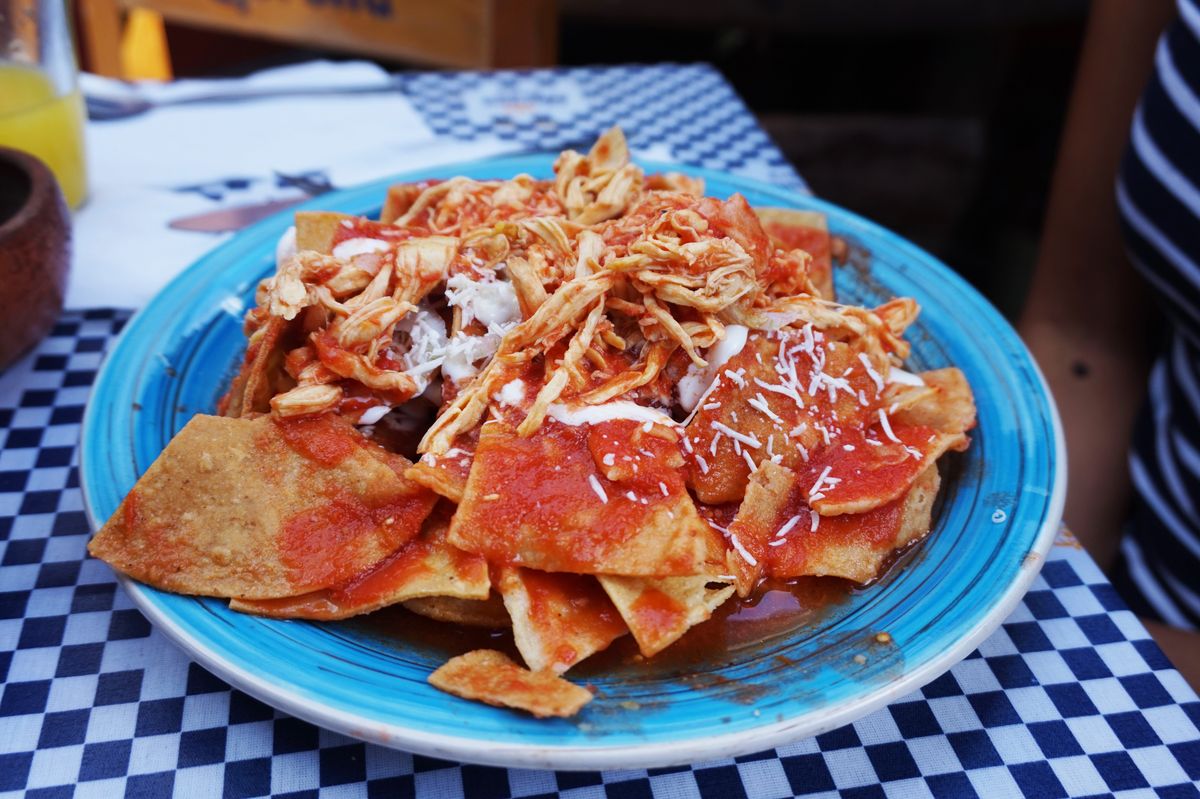 Although Mexico has tons of different and delicious soups to offer, my favorite soup here is Pozole! More like a stew actually, Pozole is a traditional Mexican soup made with meat (mostly pork), maize (also hominy – soaked and cooked field corn), and then garnished with chile peppers, shredded cabbage, radishes, onions, lime, and oregano. In some cases, you can also eat it with avocado, which is always a good idea 🙂

-> INTO SOUPS? You will enjoy our post on Vietnamese Soups and more.

Pozole is often served as a celebratory dish for birthdays, weddings and other special events. You can find it many different Mexican restaurants as it is a classic art of the cuisine. There is a red, white and green version of the soup – all with slightly different ingredients. My favorite one is still the classic, red version. 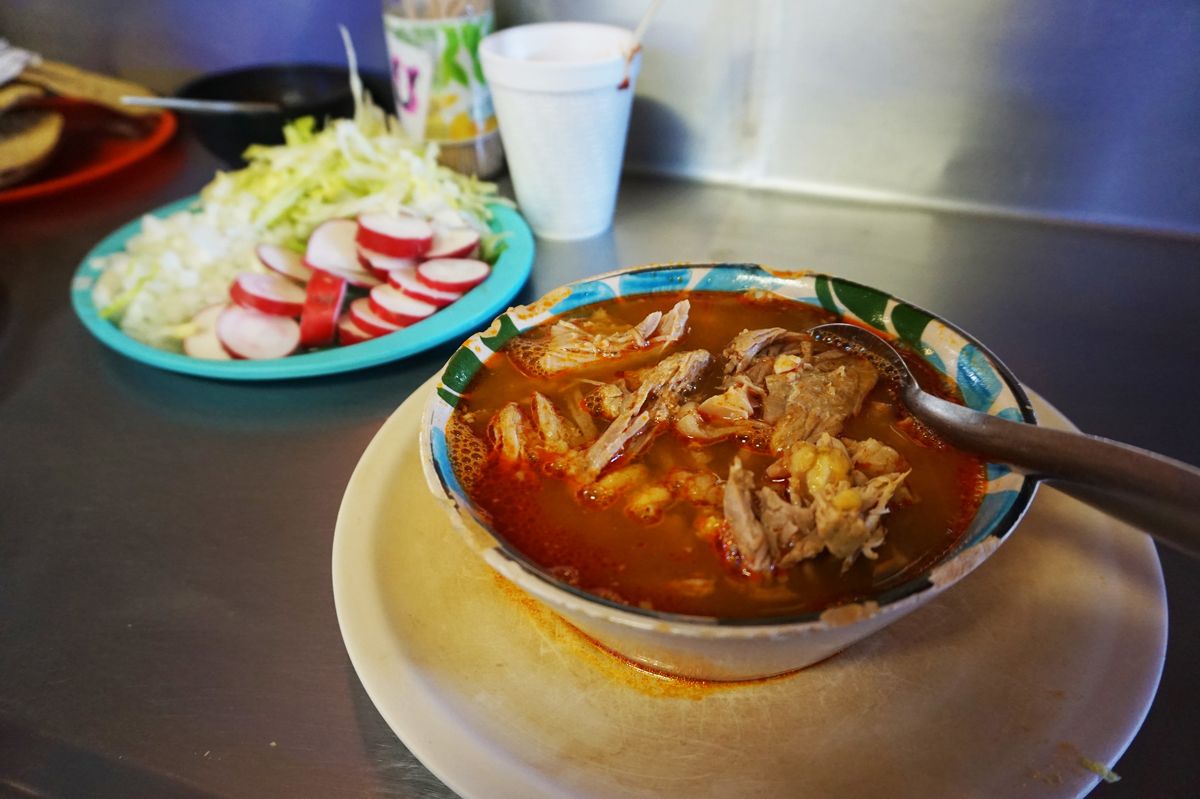 After having had a relatively bad, meaning untasty, experience with eating Tamales in Mexico I have now definitely considered my opinion on this dish – I actually really do like them a lot! First of all, Tamales is a type of dish that you might not be aware of if you haven’t been to Mexico before. It’s not your typical Mexican food but it sure should be!

Tamale is a dough (corn-masa)-based dish with different fillings and steamed in a banana leaf or corn husk. Fillings range from meat to fruits to vegetables. It is a very old and traditional way of serving food as already the Mayan used this technique of wrapping their food to make it portable – basically, it was the first to-go meal in Mexico 🙂 The process of preparing Tamales is not that easy and you will find an entire family preparing these for special occasions. You will usually find them stored in large pots in big batches. 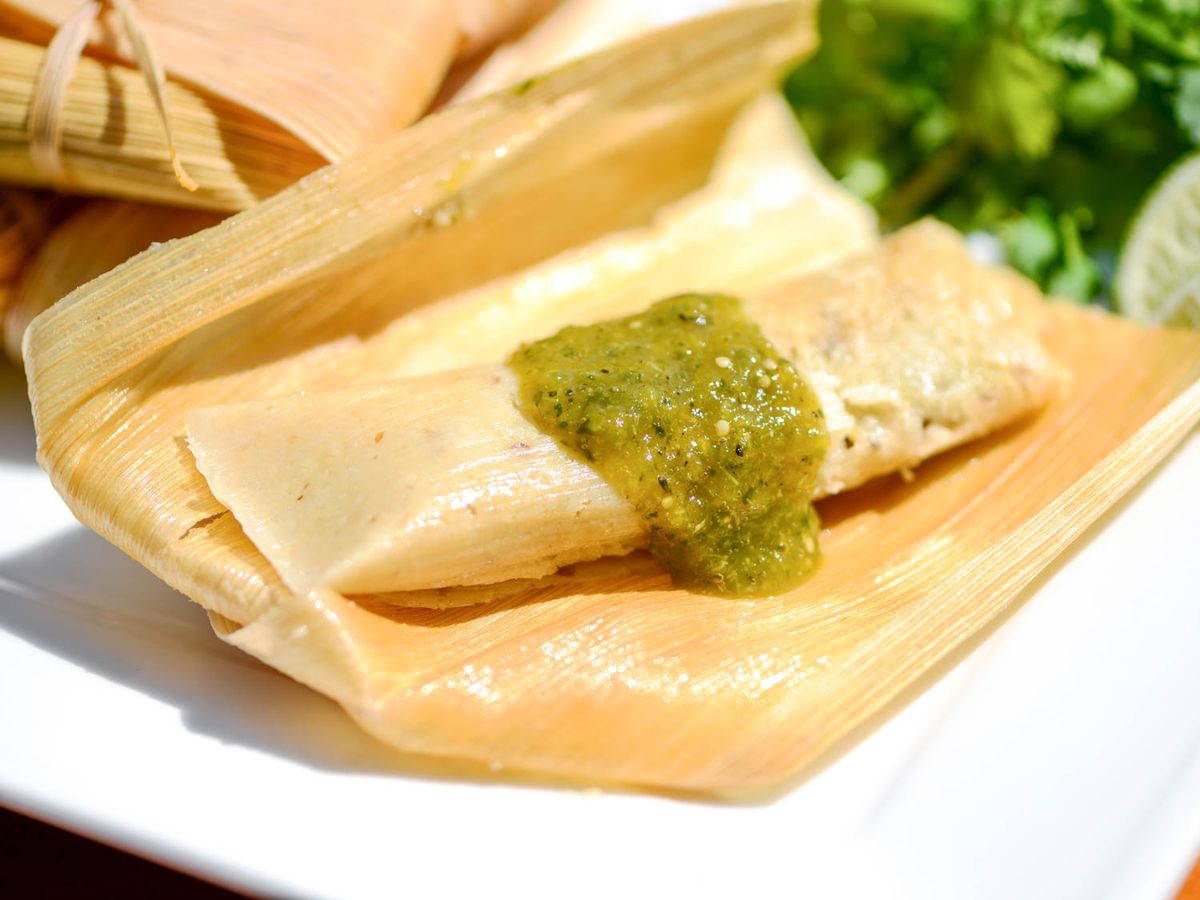 Carnitas are probably one the greatest inventions of Mexican cuisine – that is if you are a fan of pork meat. Essentially, carnitas – a small version of carne (meat) – are slowly simmered or braised pieces of pork meat. The process takes around 3-4 hours and makes the meat extremely tender, juicy, and flavorful. Te meat is then commonly garnished with onions, chopped cilantro, lime, and salsa. Typically, carnitas is served in tacos but can also be found in tamales or tortas (sandwich).

What makes carnitas so special is that once the meat is simmered and tendered to perfection it is then turned around and roasted from one side – making ti very crispy! You will find this meat in many places throughout Mexico – a must-have and try dish when traveling here. 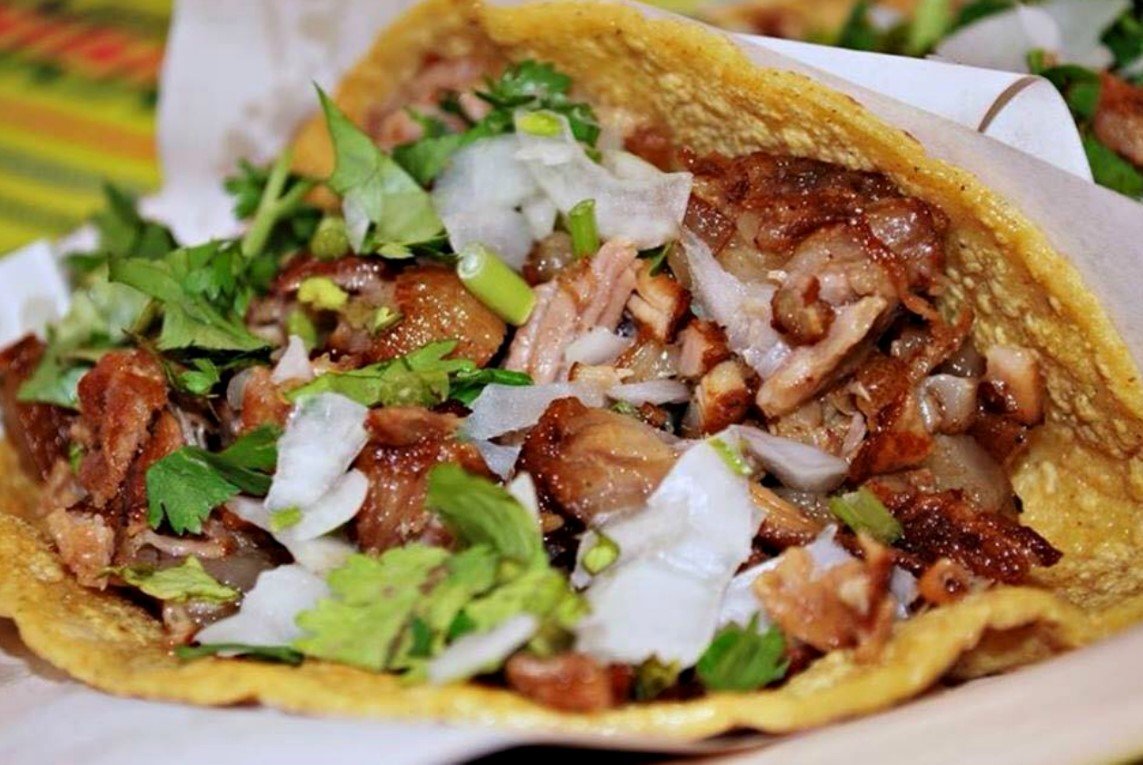 Ok, imagine the flavor of carnitas with even more delicious ingredients, topped with a small layer of melted cheese! Yes, it is possible (México es mágico) and this dish is referred to as Alambre! It consists of chopped, grilled beef (sometimes pork or chicken), small pieces of bacon, bell peppers, onions, and cheese. It is a common dish in Mexico, though mostly found in Mexico City and the state of Oaxaca.

Topped with some finely cut cilantro, Alambre is a great classic dish served with tortillas. Another one of my favorite dishes in Mexico. 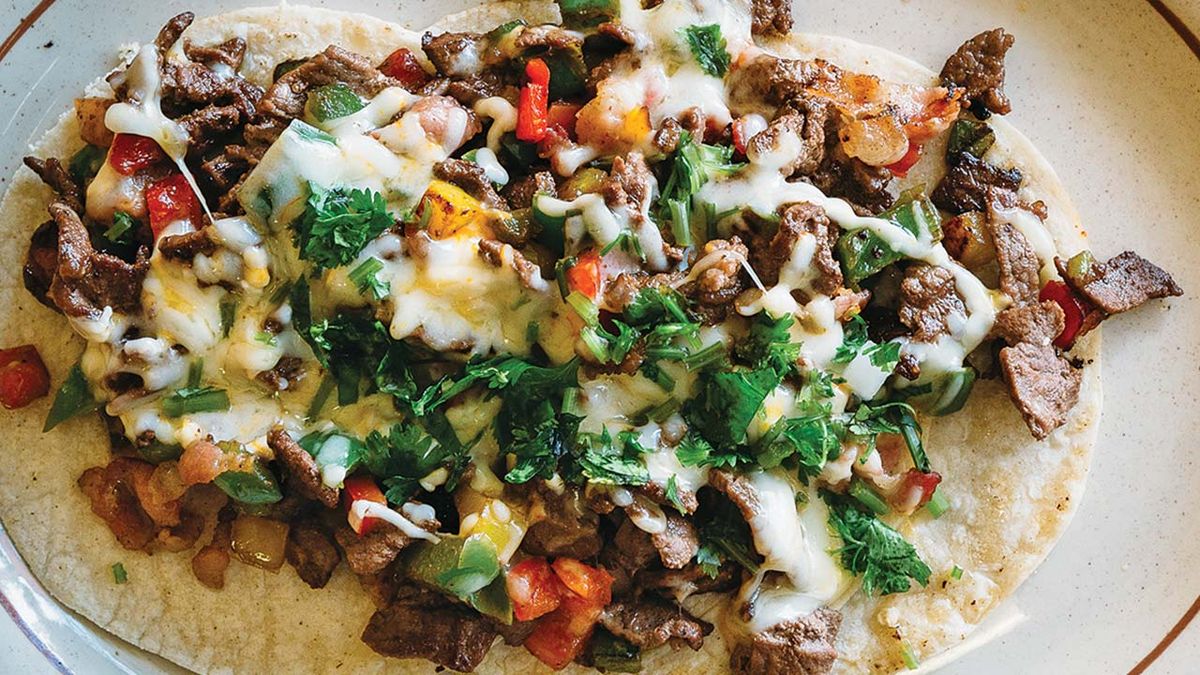 Not an actual dish as such but a very typical kind of meat cut that you will find in Mexico is called Arrachera. It is commonly known as flank- or skirt steak and is a beef cut from the belly. Usually, it is marinated with citrus juice, garlic, chiles, and onions. It is best grilled over an open flame and served with tortillas and toppings of your choice. It is by far one of my most delicious meats I have eaten…ever! 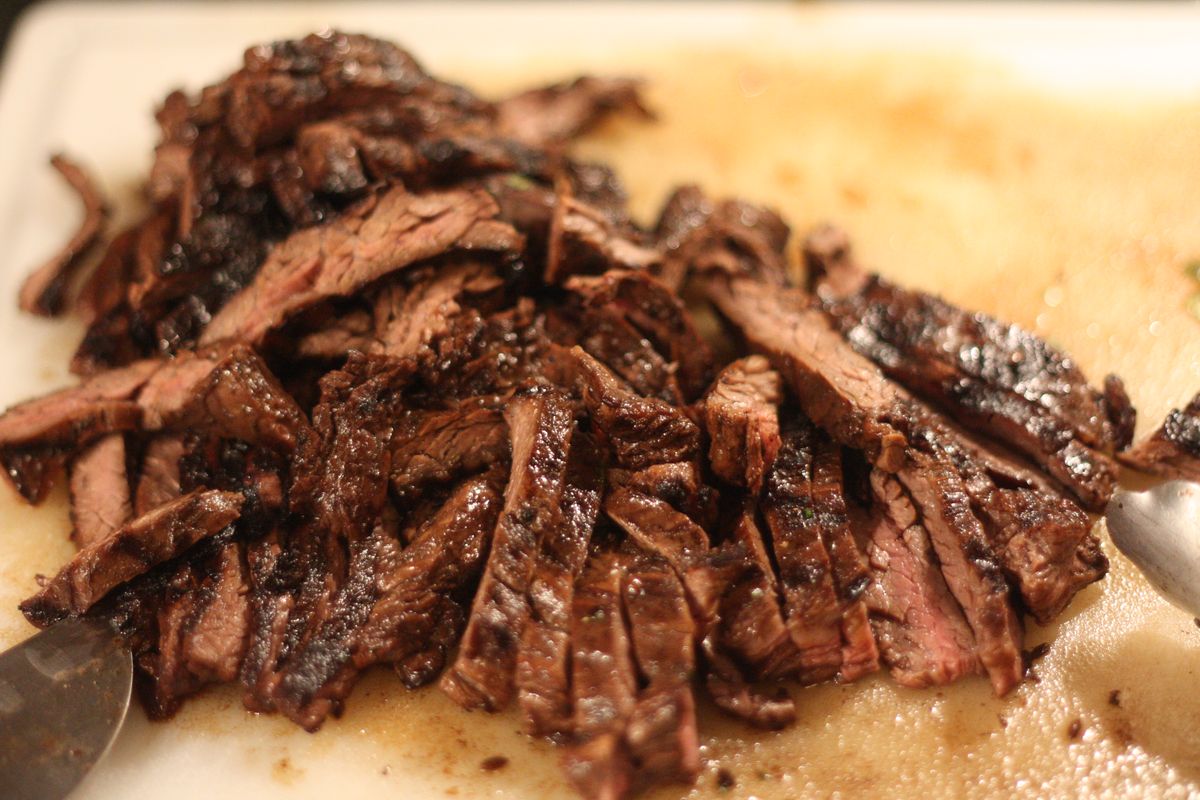