On the road to Mandalay,
Where the flyin’-fishes play,
An’ the dawn comes up like thunder outer China ‘crost the Bay!

Following the path so brilliantly displayed by Rudyard Kipling in his poem ‘Mandalay’ we made our way to the same-named town. Mandalay is a city located in northern Myanmar (Burma), situated along the Irrawaddy River. It was the country’s last independent royal capital and is considered to be one of the cultural centers of Myanmar. Although mainly used as a transport hub for travelers it still offers quite a few sights to see and visit. Due to its history of British invasions and Japanese occupation the city was partly destroyed and now rebuilt by a diverse group of mainly Chinese and Indian immigrants who moved to Mandalay after the country’s independence in 1948. There is a strong ethnic diversity and this is reflected in the city’s architecture and urban culture.


Where to Sleep and Eat

Mandalay is still building-up its touristic infrastructure and more hotels, hostels and guesthouses are being constructed as we speak. In general most of the budget accommodations can be found in the western part of the city located just around the area of the palace moat.

We stayed at the Royal Guesthouse located on 25th Street, between 82nd and 83rd Street. Although the rooms are a bit small and stuffy it still is a great budget guesthouse to stay for a short while and discover town. WIFI is available and there is a small breakfast included. Apart from this one there are still quite a few others scattered around this part of the city.

Due to its ethnic diversity you will find a lot of different food throughout town. Despite this it can be a bit difficult to find the ‘right’ kind of food, but we opted to go for the Chinese and Indian food. Our favorite was to eat in one of the many street stalls that sell Indian chapati and rotti – this was probably one of our favorite spots to enjoy some extremely delicious Indian food! There are many spread across town and around the area of the guesthouses.

The town of Mandalay is accurately planned with numbered streets and lettered roads and can easily be navigated (most of the time). Due to its diversity there are numerous pagodas, churches, mosques and Indian temples scattered across town that can be visited. Despite the (at times) insane traffic and heat we decided to travel around town by bicycle and discovered a few spots that are worth to see.

You might have already seen numerous pictures of orange-robed monks walking along a beautiful wooden bridge while sunset or -rise. These were all taken along the U Bein Bridge – the longest and probably most famous teak bridge in the world. It lies just at the Taungthaman Lake, a bit further out on the way out of Mandalay. We actually went there by bike and it took us a bit – nevertheless it is a great way to explore the city.

Created in the 1850s it is now one of the most visited tourist attractions of Mandalay. It is over one kilometer long and stretches across the lake to the former Burmese capital city of Amarapura. Obviously the wooden pillars have been replaced over the years but the shakiness still remains in many spots. It is a great place to visit for sunrise and sunset as the combination of light and bridge make it one of Myanmar’s most photogenic spots! You can also find a nice pagoda – the Taung Mingi Pagoda right at the entrance of the bridge.

During dry season the water is almost entirely gone – unfortunately this was the case when we visited. Nevertheless we had a nice walk across and were still able to take some decent pictures. 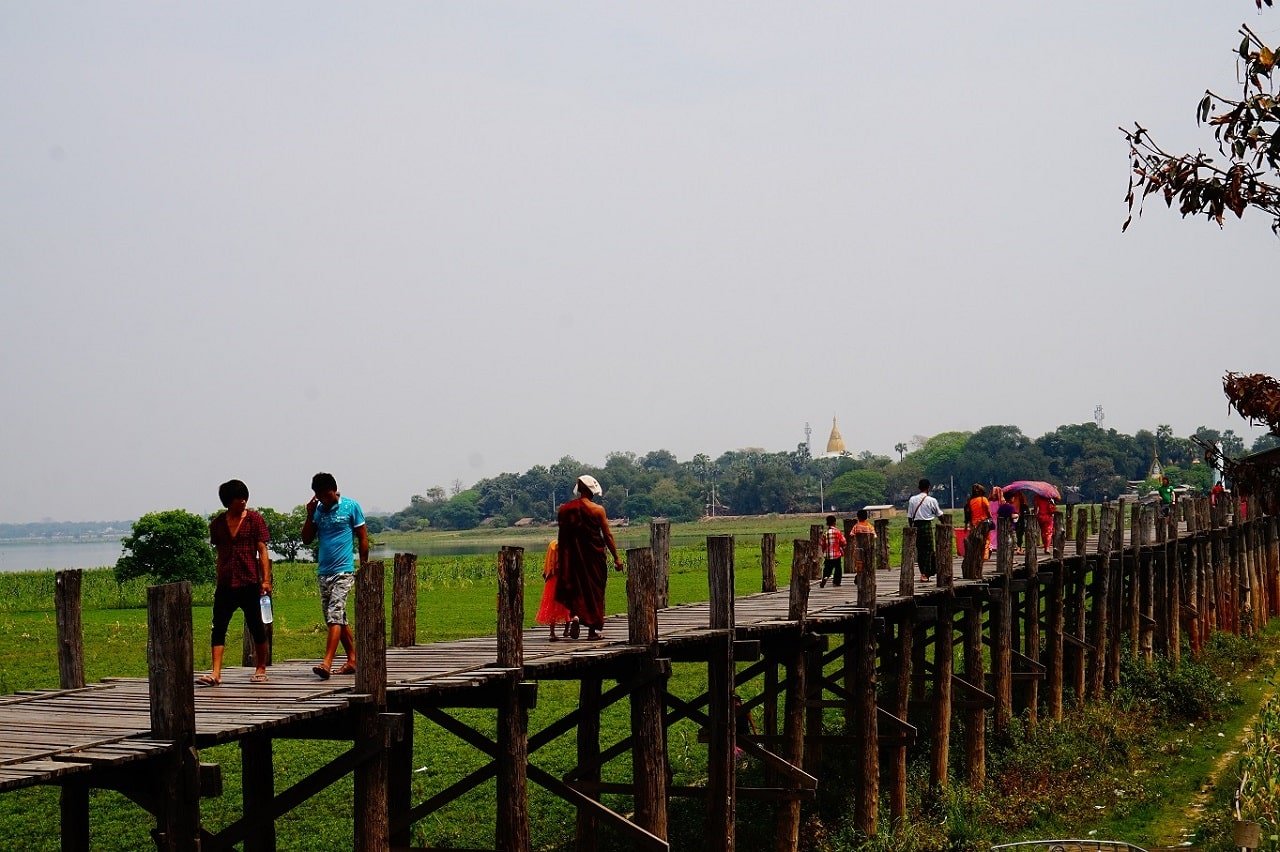 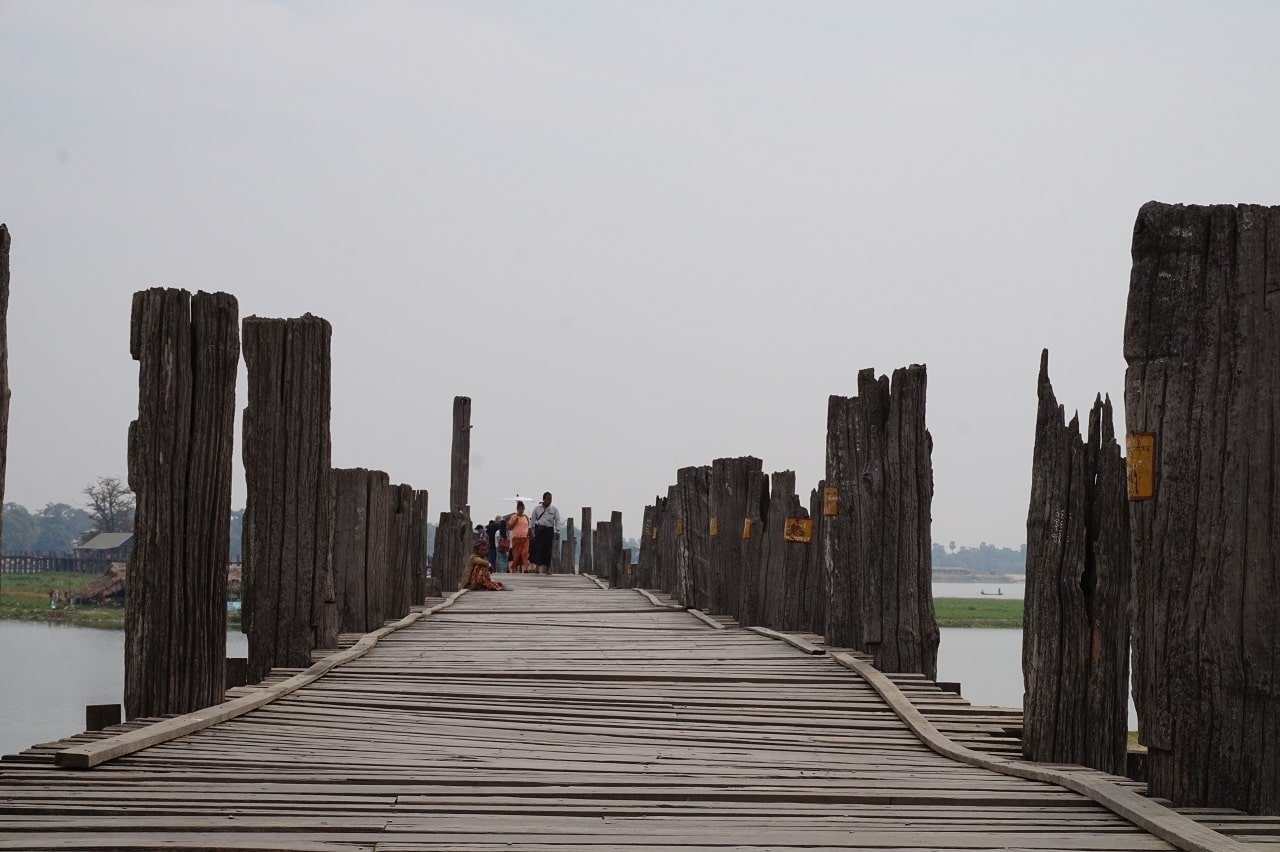 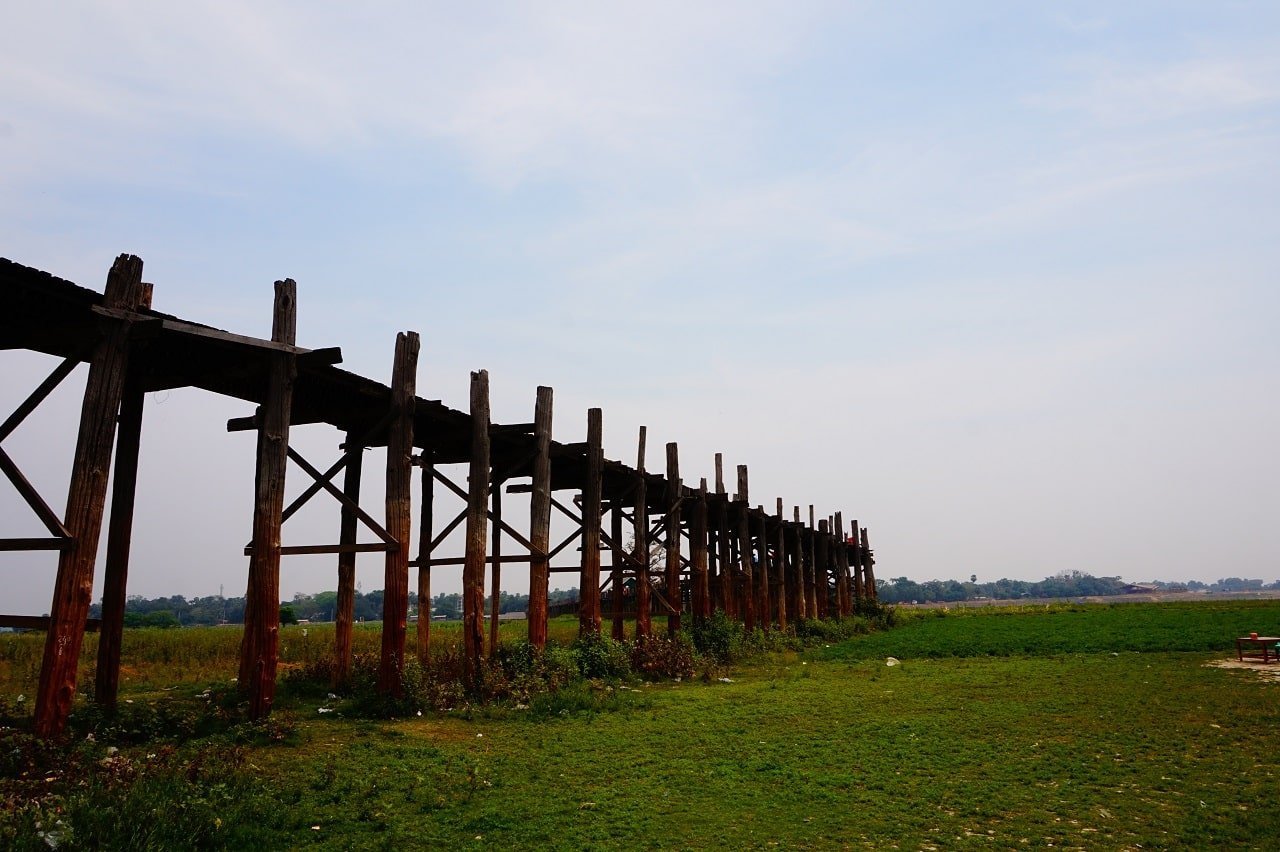 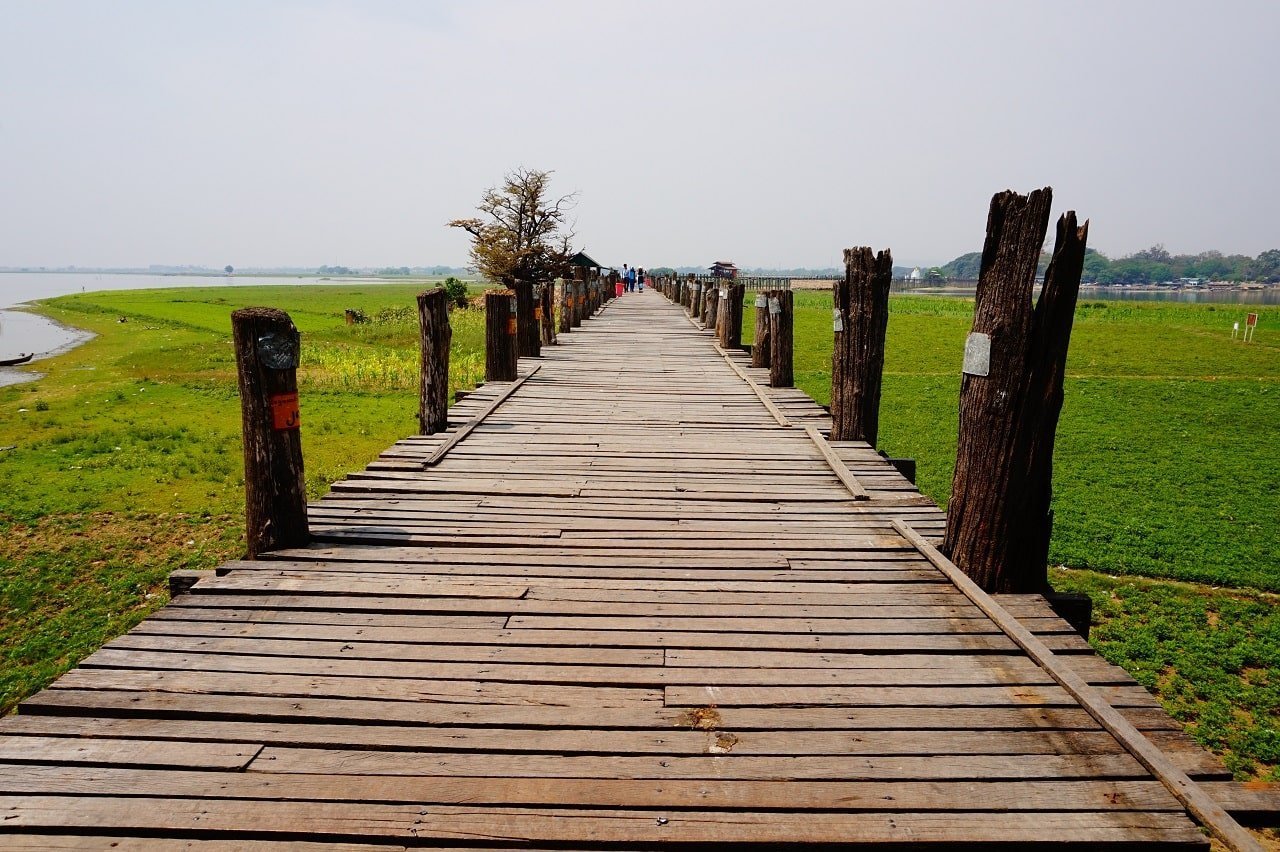 Mandalay hill is a roughly 200 meter high elevation in the center of town from which you can enjoy some nice views of Mandalay. On top of the hill lies the Sutaungpyei Pagoda, an important Buddhist pilgrimage site. There are four major stairways that lead to the top of the hill, taking you around 45 minutes. Despite it being a very tiresome walk the locals ensure you that it is good for your soul and body, even encouraging and motivating us on the way up. In case you are too lazy there are taxis that take you up along the southern entrance from where you can then even take a small elevator to the top.

Best time to reach the top is a sunset as you can then enjoy the beautiful light and view of Mandalay beneath you. We were absolutely tired but definitely agreed that it was worth all the effort. 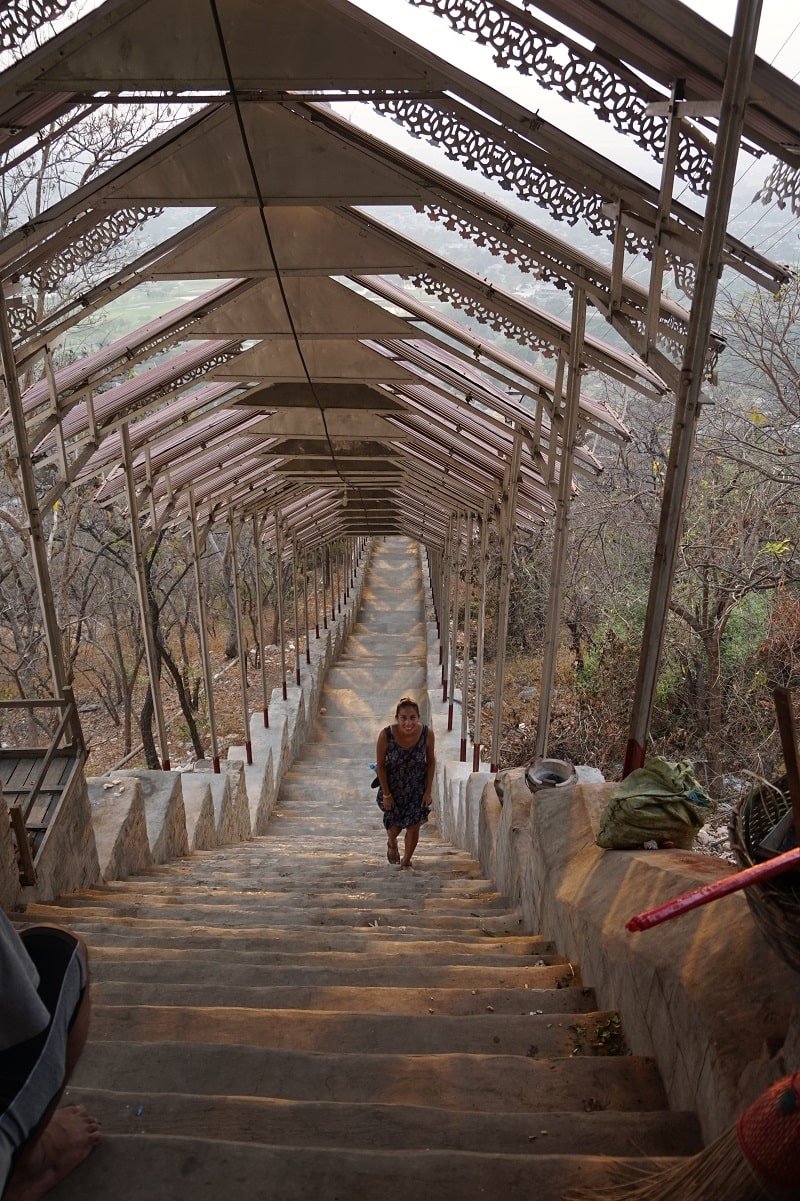 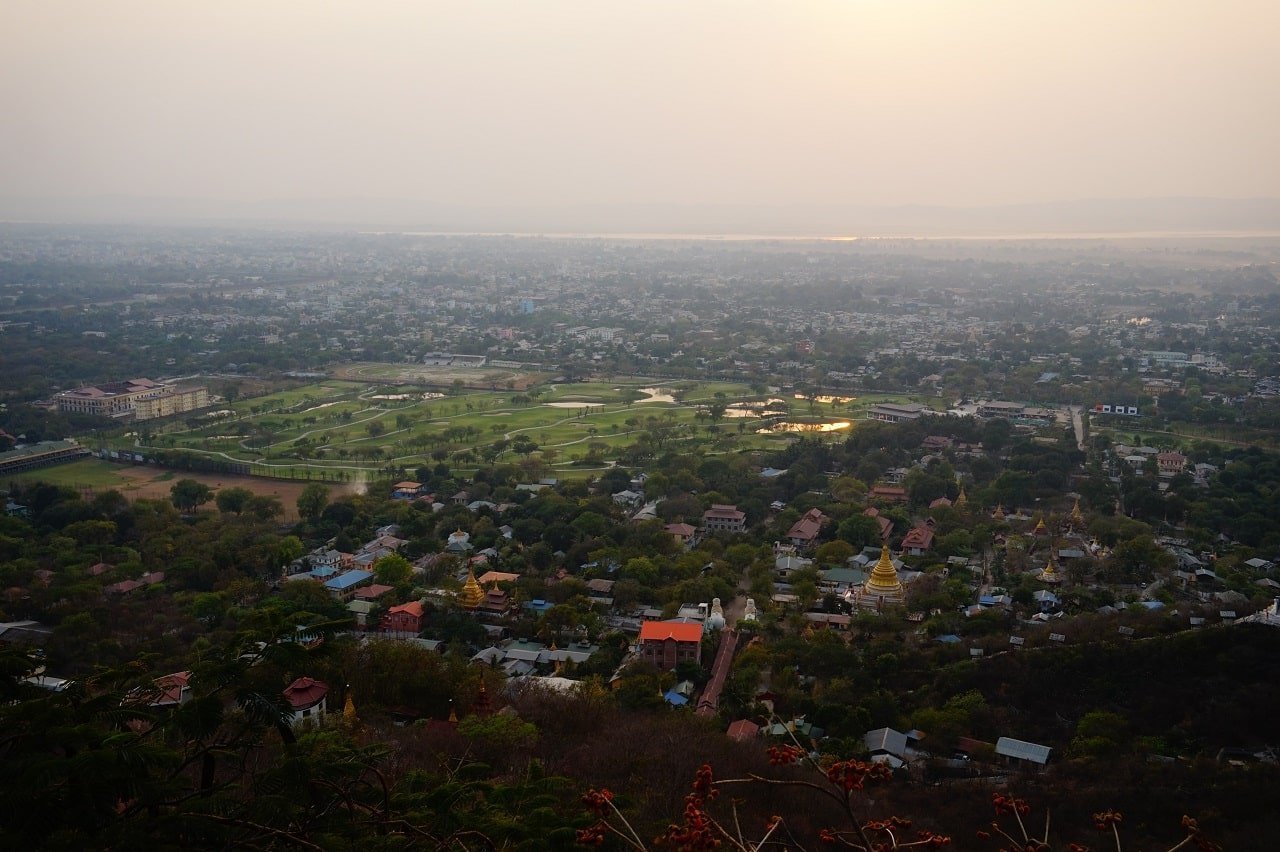 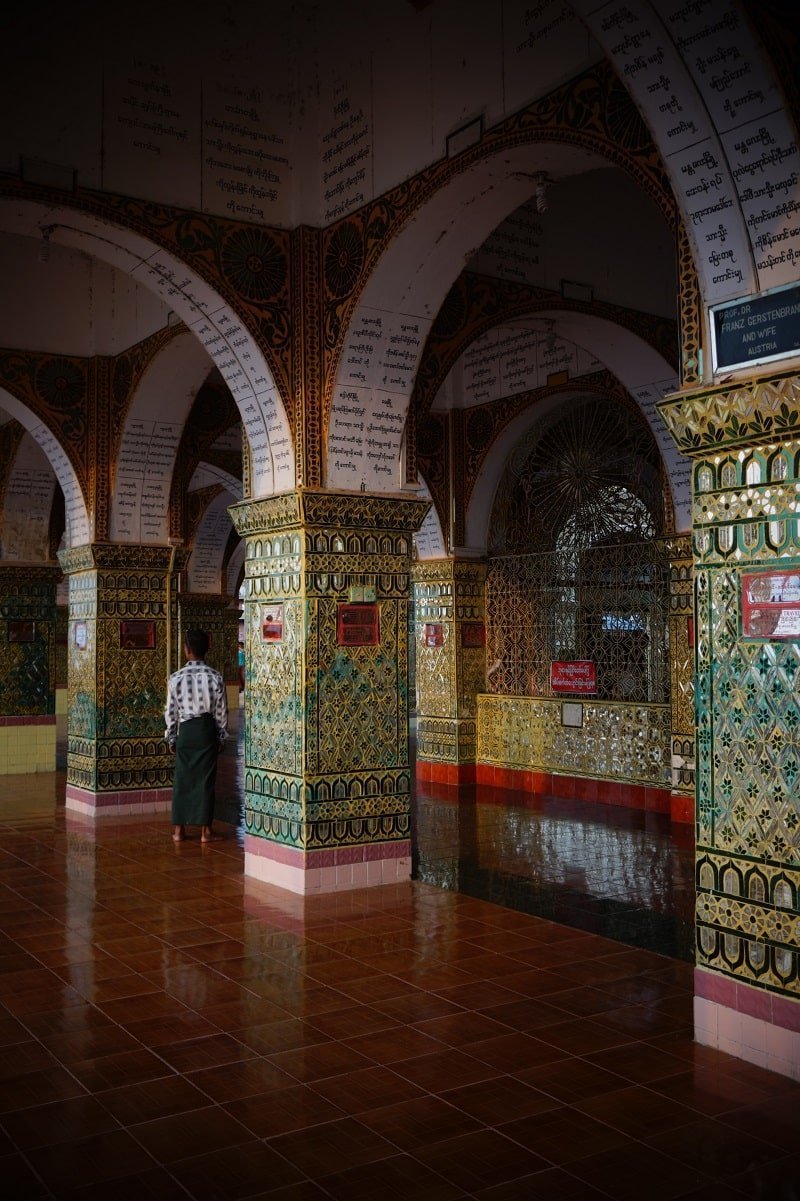 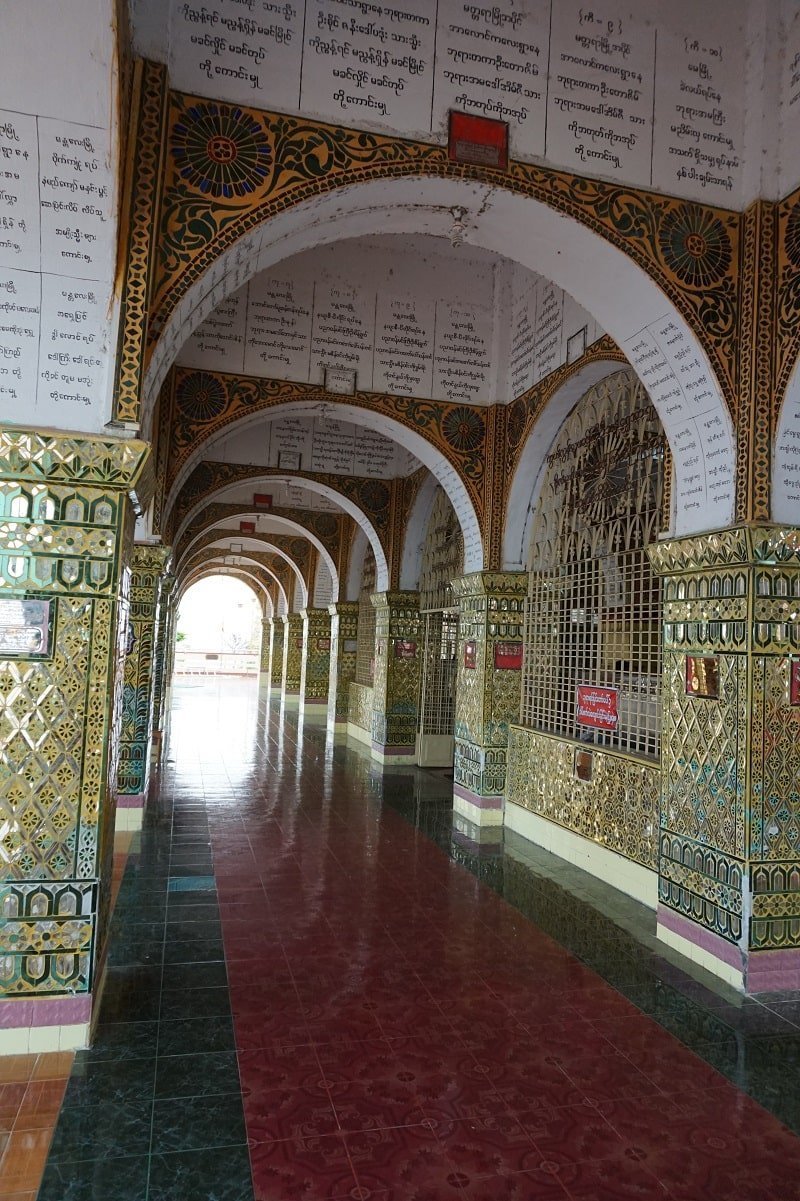 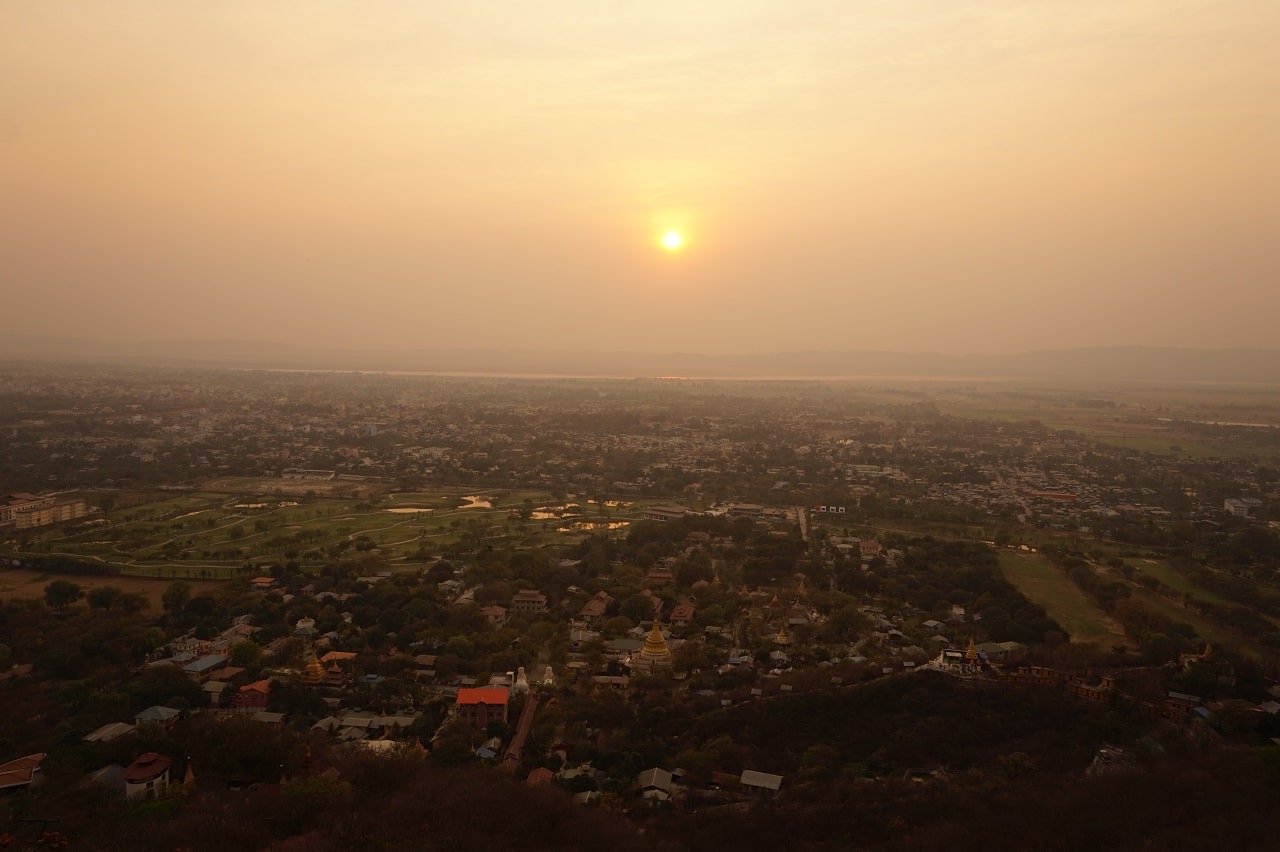 The Mahamuni Paya is one of the most important and legendary Buddhist pilgrim sites across Asia. Almost 4 meters tall, this Buddha image is completely covered in layers of gold. To pay respect to the Buddha image, male devotees apply golden leafs onto its body. Only men are allowed up close to the image, women have to remain in the back and are not allowed to enter. As a ritual the face and teeth of the Buddha statue are brushed every morning starting at 4. There are also some interesting pictures of how the statue looked many years ago before gold was applied. Unbelievably, the layers of gold now made the statue weigh over 6.5 tonnes!!

The dress code is very strict here so be sure to cover your shoulders and wear long trousers. You can hire Sarongs/longyiis at the main entrance – which I eventually did and it didn’t look that bad, or? 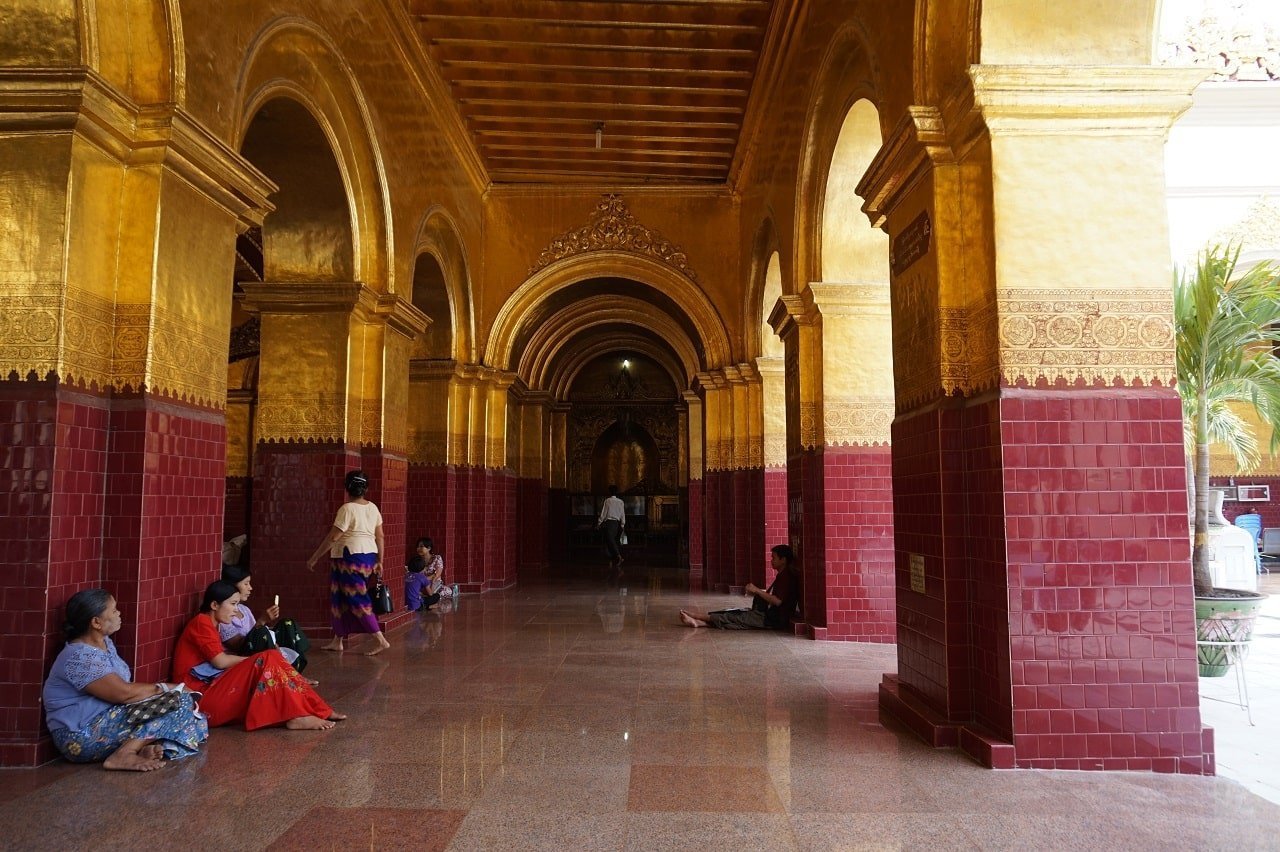 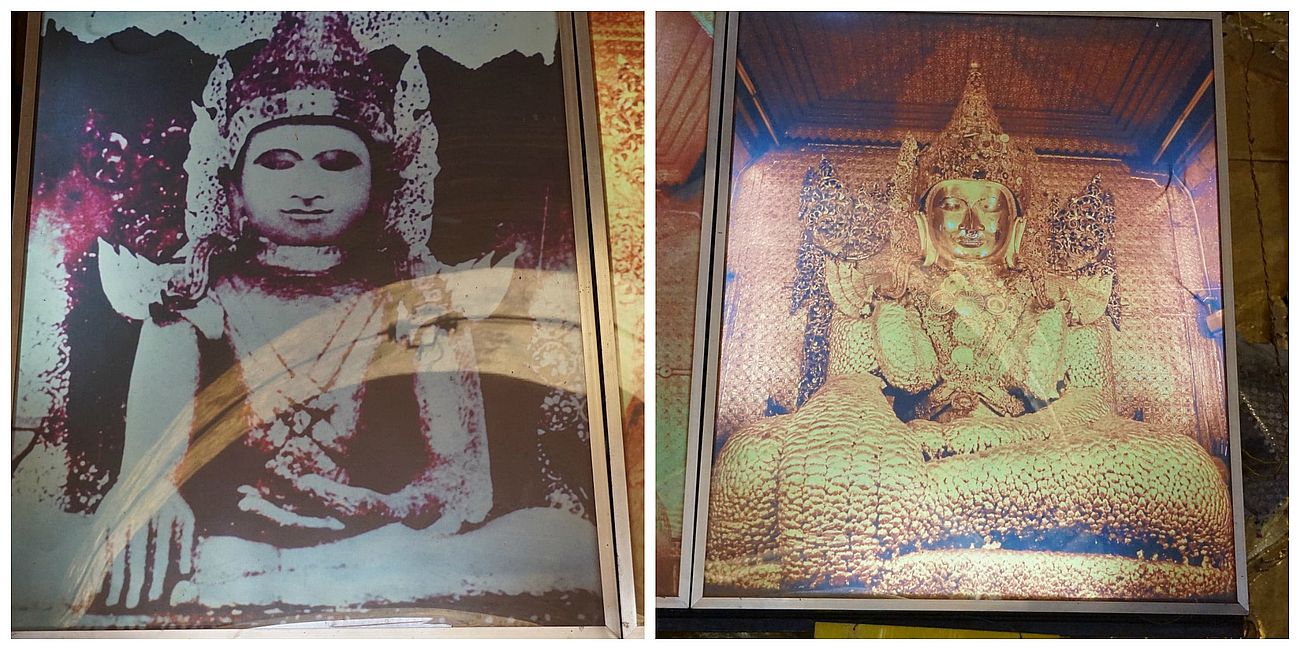 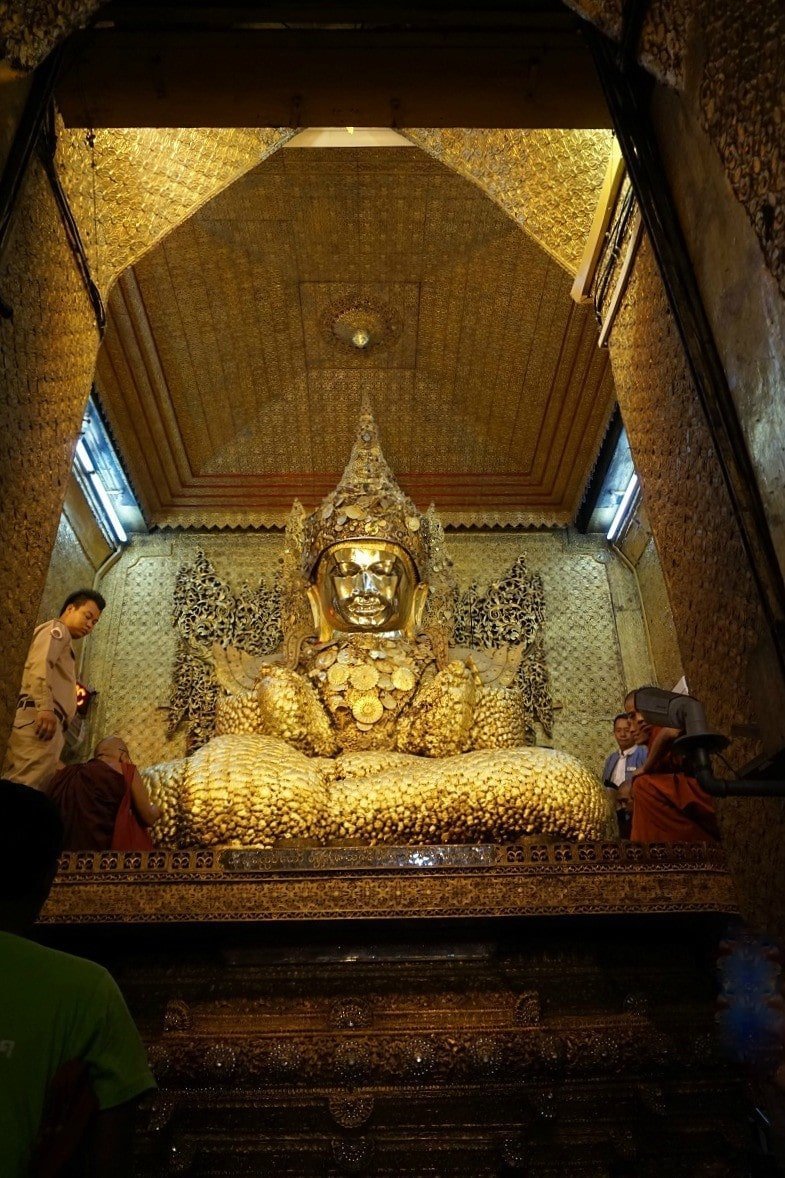 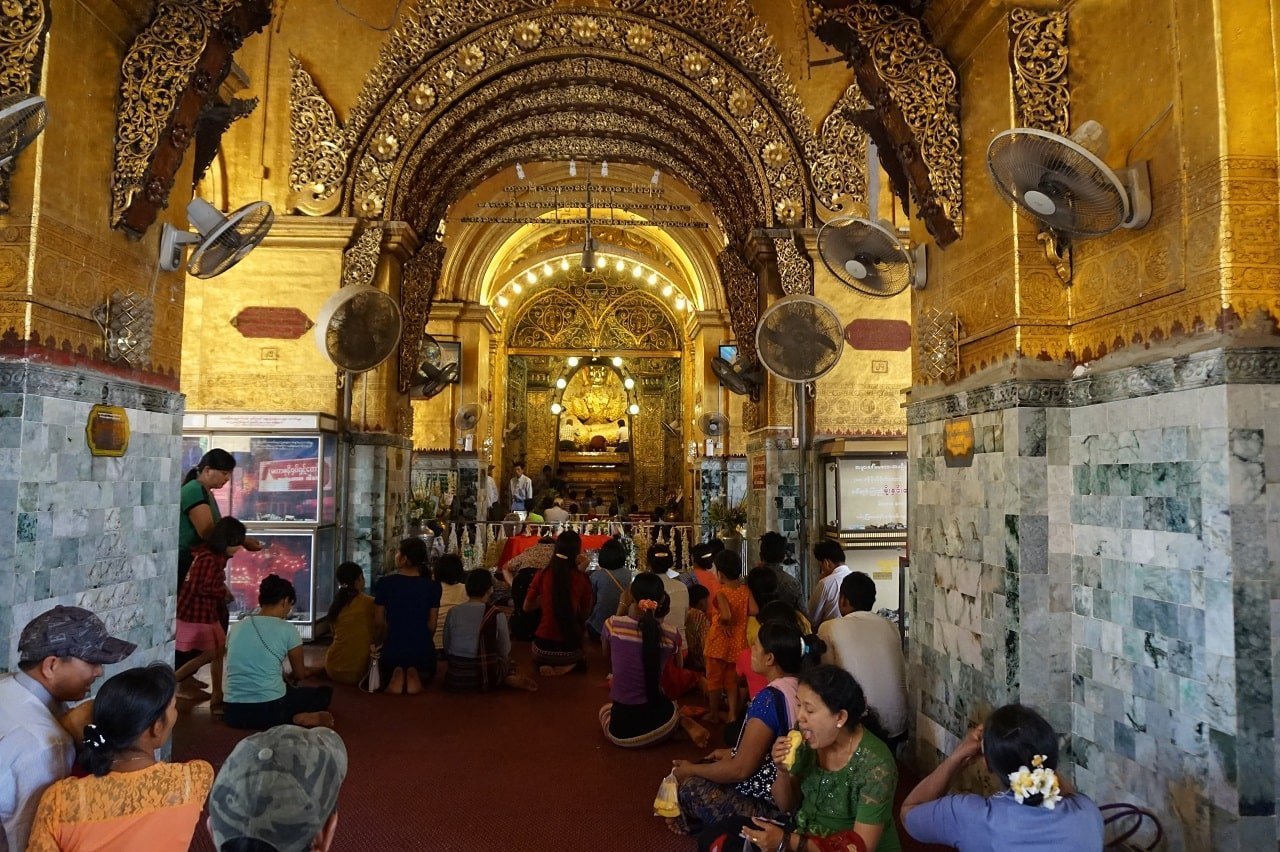 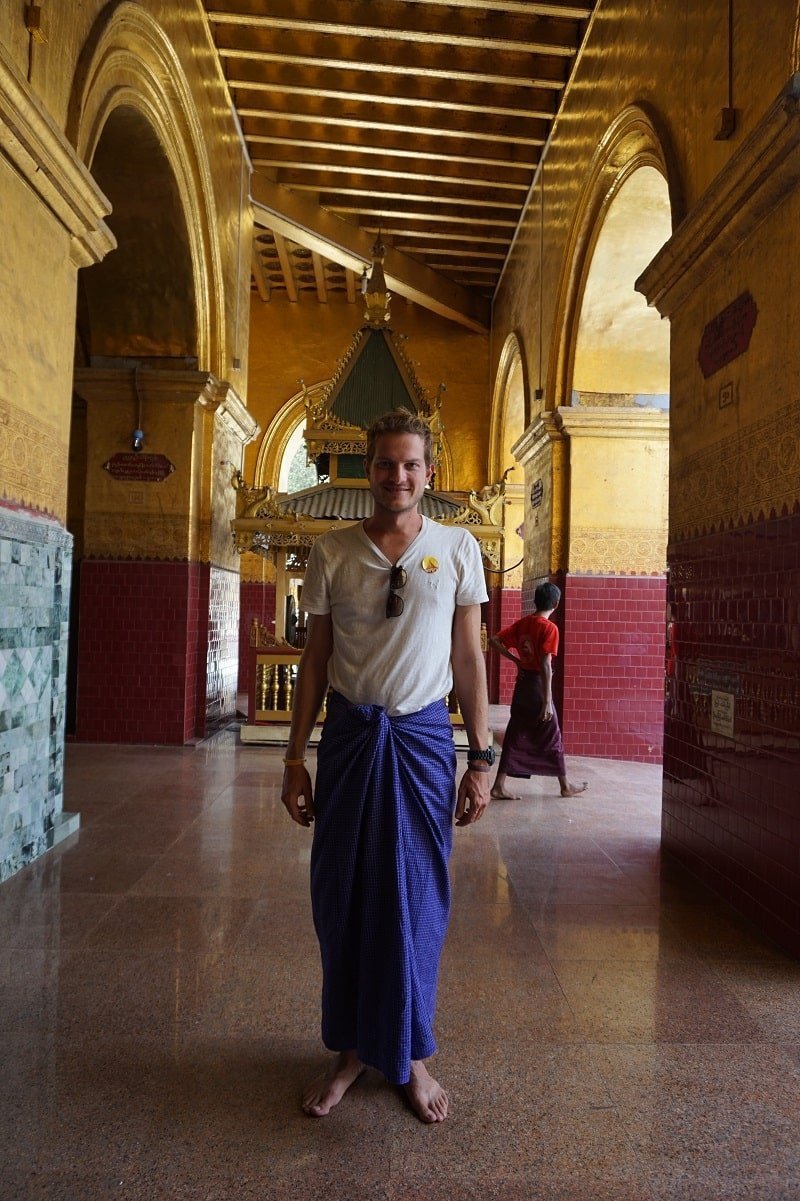 We ended up staying for around 3 days in Mandalay and that was just about the right time to spend there. We enjoyed some nice food and experienced some tiring but exciting bicycle rides around town. We did not end up visiting the Mandalay Palace as we heard that it looks more impressive from the outside than it actually is inside. Nevertheless it can still be worth a visit in case you are interested in seeing these kinds of sights.