During our last longer trip around Southeast Asia we passed through lots of stages that made us become better travelers (at least that’s what we think;) ). One of them was to try something new and exploring the unknown. To me, at least, the concept of hitchhiking was something that I never ever considered when traveling. The feeling of standing by the road, waving down random cars and squeezing in between strangers never really occurred to me of being part of my travels. Yet, after a fateful encounter with fellow travelers who happened to hitchhike a bus that we were taking in Cambodia, this feeling started to become reality. A few days we started our first hitchhiking trips which led us to far-away places and enabled us to meet people on an entirely new level. We absolutely loved hitchhiking in Southeast Asia and made unforgettable memories. In this post, I want to bring you closer to the concept of hitchhiking, in general, and how it particularly works in Southeast Asia. Some tips and recommendations (and observations) that worked for us as a couple.

Hitchhiking can be very different from country to country. While we had an amazing time in Myanmar we had a very hard time finding rides like this in Laos or Vietnam. Cultures are different and people react differently to a person, and especially a white foreigner, standing on the side of the street. In general, though, I can say that people in every country we have been to in Southeast Asia have been kind and open and we did not have any sort of bad experience. 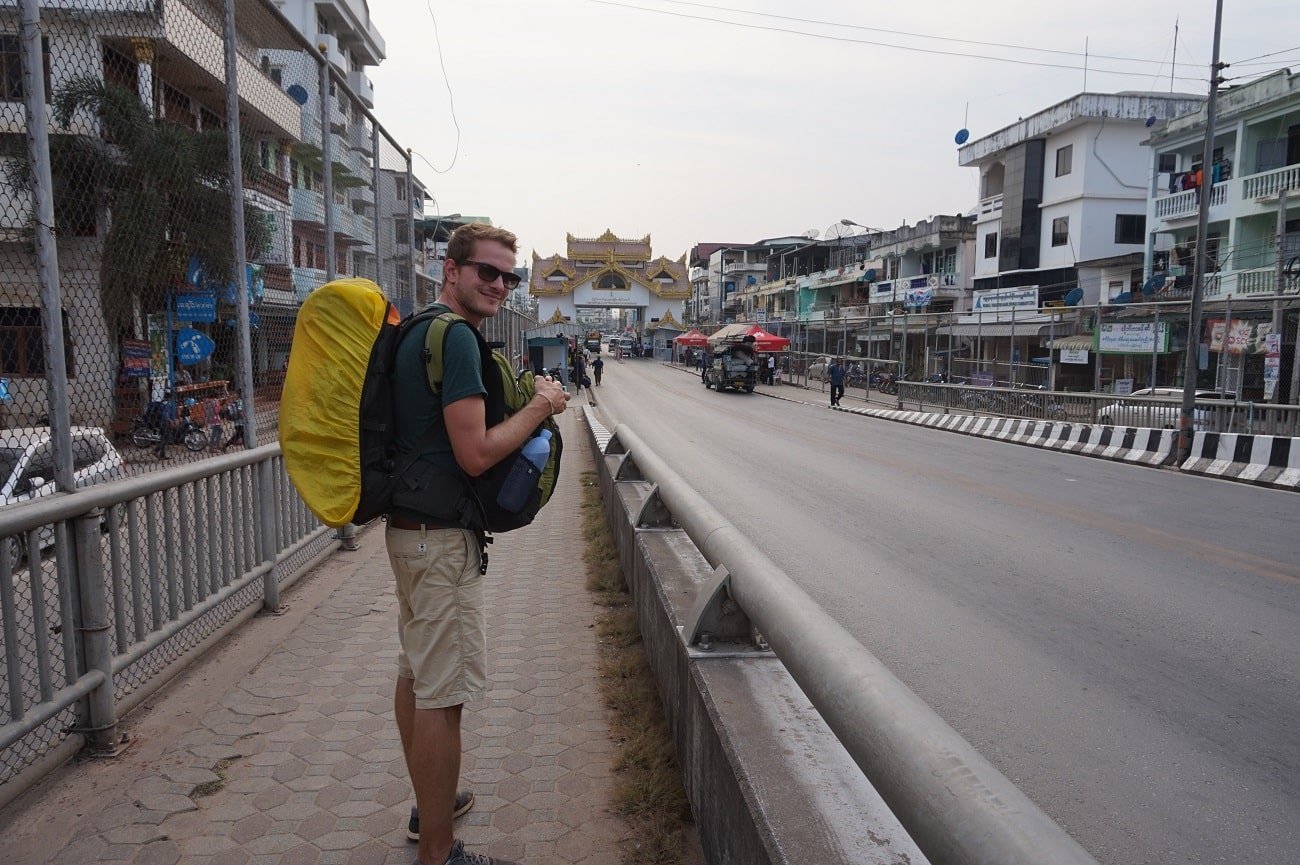 First and foremost you have to mentally prepare for a day of hitchhiking. It can be fun and adventurous but also extremely tiring and exhausting, especially if your rides are uncomfortable or if you have to wait in the midday heat in the middle of nowhere. Be prepared and don’t set your expectations too high, this way it will only get better :).

Before going on a trip make sure that you write a small note, in the language of the country, that states where you want to go to. We have had lots of funny and annoying moments trying to tell the driver where the hell we were heading. Think of the stops in between and write them down as well as your rides will not always bring you all the way. Write it down and you will already be in a better position in case the people do not understand you. In the Philippines, for example, it was a bit easier as people understand English and know where you want to go.

Make it clear from the beginning that you won’t pay

This is probably one of the most important things you have to do. There is nothing worse than getting a ride and then ending up in an argument with the driver. Make sure to make this very clear once you stop the vehicle and talk with the driver. Note down the words “no money” in the local language as well to make sure they understand! We did this mistake during our first hitchhiking trips in Cambodia and ended up pissing off others and ourselves – totally unnecessary!

Be prepared and patient

Southeast Asia is a very tropic region where temperatures can easily surpass 35 degrees during the day. Also, there are monsoon seasons that can affect your hitchhiking plans a lot. Make sure to bring enough water and food along and a hat/cap or rain cover in case you end up on the back of a truck in the outside. Wear proper shoes and have your bags packed tight and always carry your valuables on your body with you in a small bag.

Also, you have to be patient. There are times where you might wait for hours to get a ride (but this is mostly linked to your spot). Rides might also take forever as the drivers do not care about getting to a place as fast as possible! We usually never waited longer than 45 minutes for a ride, but this again depends on where you position yourself. Anyhow, just know that your journey might take a bit longer than expected. On average, though, we made the experience that hitchhiking rides were even faster at times than taking buses or trains. 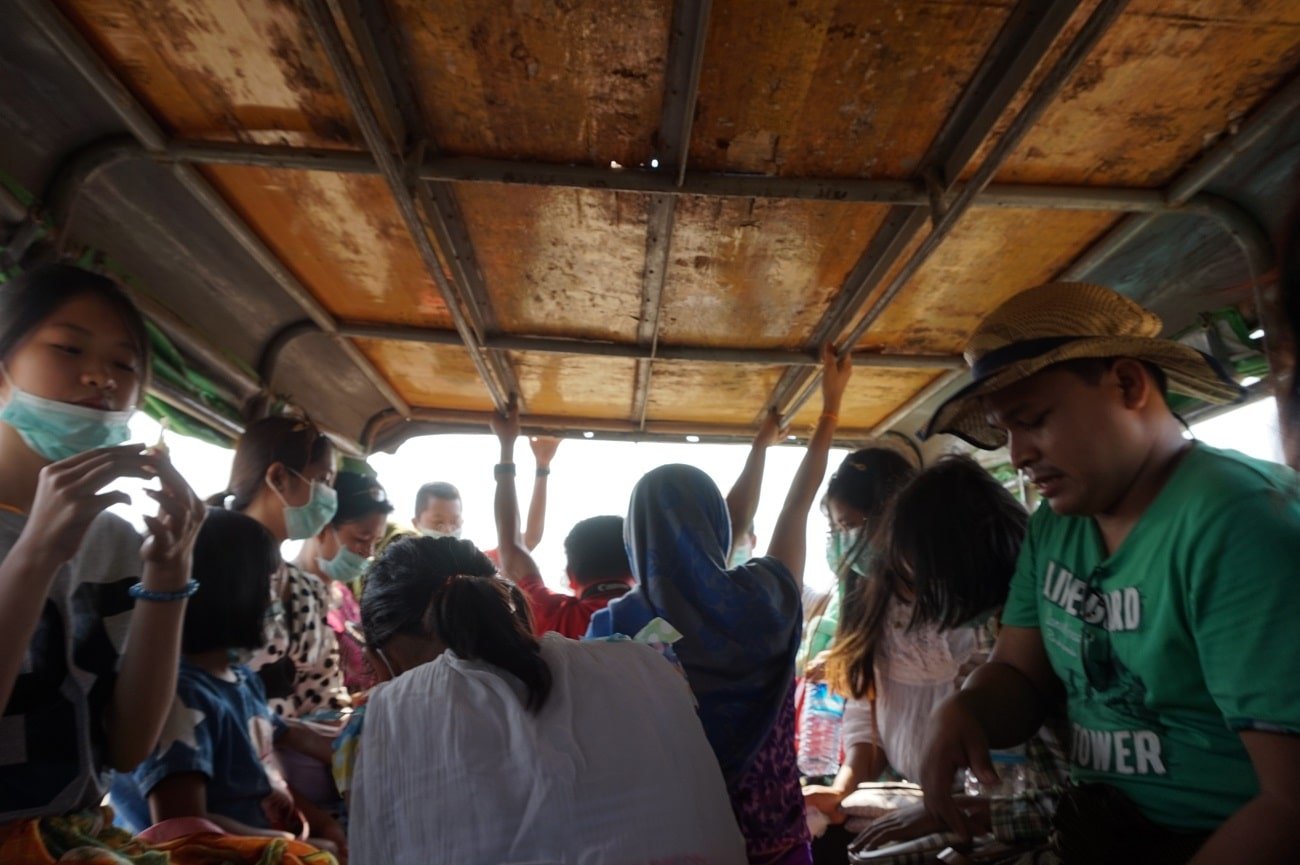 Essential! If you do not find the proper spot to start your hitchhiking mission it will not work out! A day before we were leaving a place, we already looked for the best spots to take a hitch. In general, if you are in a city, you have to get out of it and position yourself along the main road leading to your destination. Never take a hitch within the city, it is tiring and annoying and you will never find a good ride. Make sure to get out of town and stand along a street so that there is no option but to go straight ahead.

We had another experience in Cambodia where we stood on the wrong turn as we mixed up the streets on the map. We waited for over 45 minutes until we realized that we were on the wrong road. We also tried hitchhiking directly from within the city of Phnom Penh – not a good idea.

Don’t’ stick out your thumb

Hitchhiking in Southeast Asia is not a common thing for local people, they simply do not know what this is. Sticking out your thumb might get you around in Europe of America but won’t help you out here. The best way to get a ride is to wave people down (palm facing the ground) or using a sign. We first started using the thumb which didn’t work. Eventually, we starting waving and got people waving back happily – but not stopping. Wave your hand down like the locals do when stopping a taxi or collection truck and it will work out!

Hitchhiking in Laos can differ between the north and the south. The southern part is a bit easier in terms of finding good rides and moving around. There are more cars and vehicles in general around and people do not usually expect any money. The north is a bit more difficult in that sense. You will manage to get hitched between the villages and will most probably take a ride on the back of a truck. Geographically, the country is structured fairly simple with main roads (highway 13) leading all the way from the chilled 4000 islands in the south to the northern capital of Vientiane or the pilgrimage town of Luang Prabang.

In general, Laos is a country where you can hitchhike but its not always that easy. South is easier than the north.

Myanmar was by far the easiest country for us to hitchhike. People are very open and curious and love to take you on a ride. Roads are big and there is no difference within the country. You will get many friendly reactions and people will want to know everything about you. There are lots of smaller trucks that take people around so you can find a way to hitch these. We even had the luck of driving in a car with two super friendly Burmese guys who even invited us for lunch and dinner and brought us to a hostel! Myanmar as such is a very large country and spreads out fr to the north and south. Yet, there are brand new highways that have been built and are being built between the major cities so traveling here is getting a lot better.

Great country for hitchhiking. We love Myanmar and always found lots of rides (cars, trucks, buses and even motorcycles – but that’s another story!) and had a great time meeting the Burmese people. Oh right, they also all want to be connected with you on Facebook 🙂 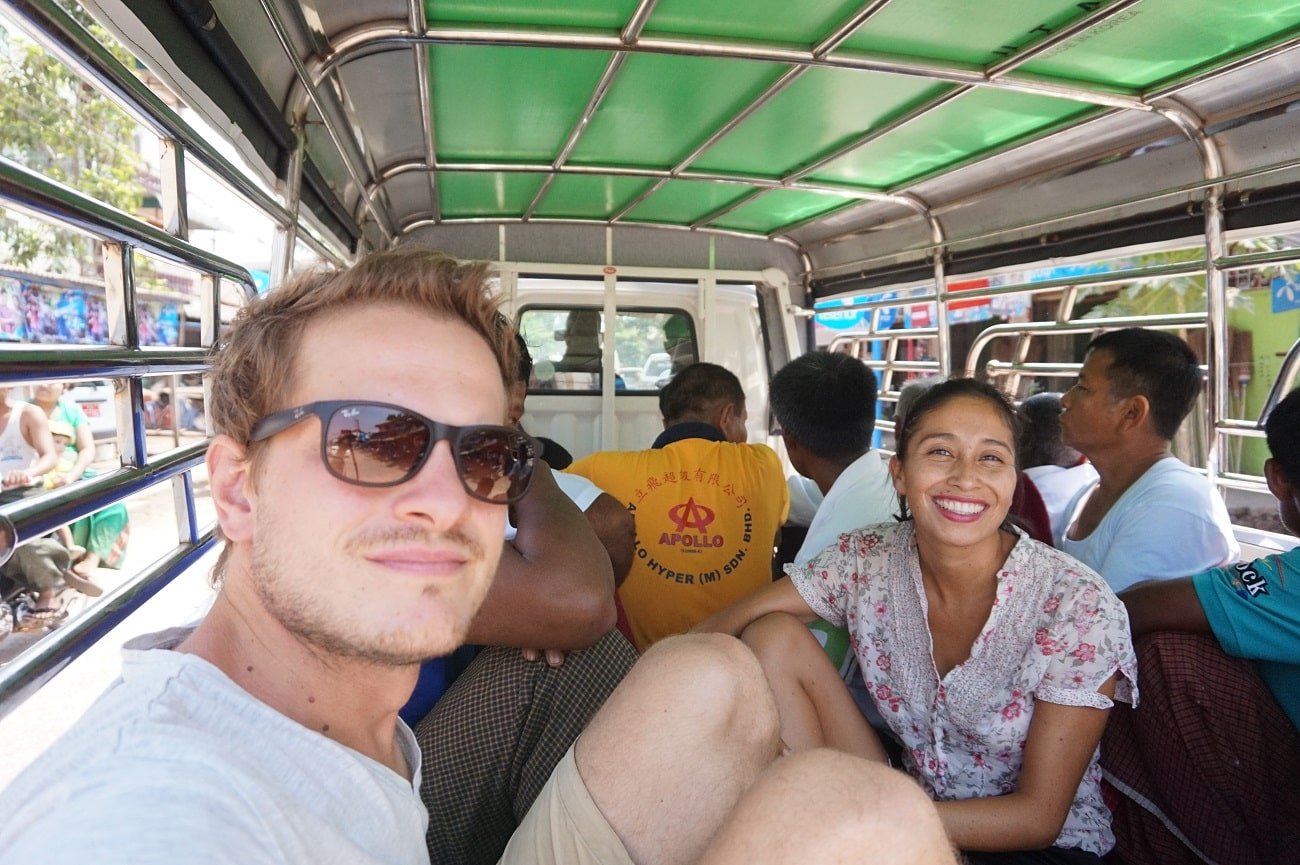 People in Thailand, and other Southeast Asian countries, are not familiar with the concept of hitchhiking. Yet, it is quite easy to do it here and people are willing to take you without money. It is simple and safe and you will find yourself mostly on the back of a pick-up truck. There are also lots of motorcycles that offer you rides but I would not suggest so unless it’s a short distance trip. Thailand is also a very large country and getting around can take quite some time. Also, there are many islands in the south that can only be reached with ferries – we never tried to hitch a ferry, could be interesting!

Thailand is a good place to hitchhike and people are open and used to foreigners.

Hitchhiking in the Philippines is fairly easy as the Filipino people are very friendly and social and love to help you out as a foreigner. You will find good rides in the provinces and will probably end up in a local transport car called the Jeepney (see picture). Hitchhiking in cities can get more tricky as the traffic tends to be horrific. The Philippines is one of the largest island nations in the world with over 7000 of them spread across an area of over 300 thousand square kilometers. Sooner or later you will have to either fly or take a ferry so many people might drop you off at a port area.

In general, the Philippines is a great country for hitchhiking due to the openness of the people and the fact that most speak English. 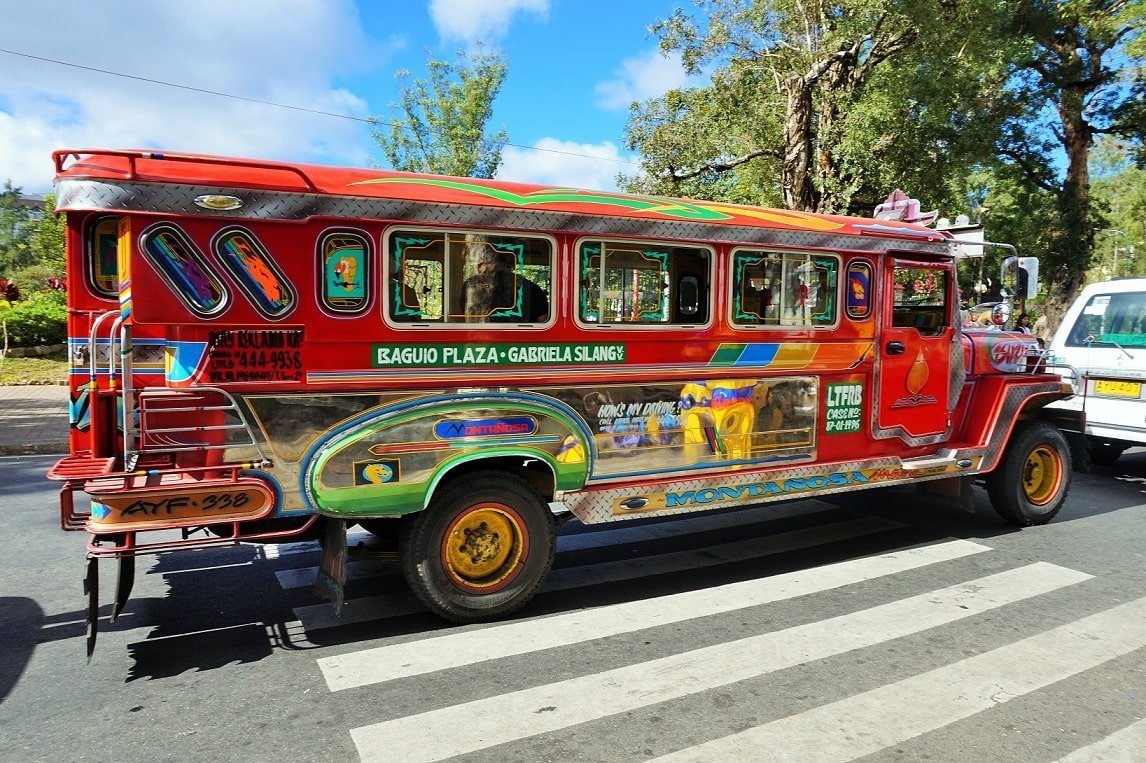 Hitchhiking in Vietnam was, at least for us, not so easy to do. In general, we experienced the Vietnamese to be a bit skeptic of us foreigners sometimes. It seems possible but not as easy as in other countries around. It was easier approaching people before they were in the car and ask them for a ride. Usually, they ask for money but you need to be persistent. The country also has a very straight-forward route leading from south to north or vice versa.

We did not do much hitchhiking in Vietnam but have heard of people doing so and finding rides fast and easy.

This was where we started the whole hitchhiking thing. A bit more difficult at first, we eventually found Cambodia to be a relatively easy country for hitchhiking. Roads are usually busy and people are interested in taking you along. We usually got rides from trucks, lorries and vans and never had any bad experiences. Cambodia is a rather small country and getting around wont take as long as in its neighboring countries. Yet, the routes are also not as clear (south-north) so make sure to plan that route a bit in advance.

A good country for hitchhiking and easy to get around.

5 thoughts on “Ultimate Guide to Hitchhiking in Southeast Asia”