In the Wild East, as they call it, lies the remote province of Mondulkiri – Cambodia’s largest and also most sparsely populated area. Located in the south-east part of the country bordering Vietnam it is still a quite unknown territory for touristic settlements. Literally translated as “meeting of the hills” it is a very tranquil and beautiful part of Cambodia – with its landscape offering a diverse mix of hills, dense forests and hidden waterfalls. Wild animals such as bears and leopards still roam these jungles. The province is also home to traditional villages of the Bunong people as well as some Elephant conservation projects and sanctuaries – with this actually being the main reason for us driving all the way out there.

Beforehand you should do a little research as to what kind of tours are being offered. Personally, we are not too much into taking part in organized tours but in this case it is definitely worth doing so. We decided to join the Mondulkiri Project – an initiative not only supporting the elephants but also the indigenous people and forests around. They have created a sanctuary for abused elephants from all over the country and are now even planning to start a breeding program. We opted for the 2-day elephant and jungle trek tour, allowing us to experience the full beauty of what Mondulkiri has to offer. The tour includes meals, water, guide fees and transport and is priced at 75 USD/person – surely a great deal of money but we knew it was for a good cause!

After having a relaxing overnight at the Nature Lodge we got collected and brought to the starting point of the tour. It was a nice “back of the pickup truck” ride over the hills and into the thick forests until we arrived at a small hut which turned out to be our home for the night. The tour was setup so that we could see and join the elephants roaming freely in the forest on the first day and then do the trek on the second day. We even got the chance to take a bath with one elephant!  It was very impressive standing by such huge animals, especially in the water. We were frightened and excited at the same time but it was such an overwhelming experience!

Each elephant is accompanied by their mahout, usually a member of the local Bunong tribe who would take care of the it. We were given some bananas to feed the elephants and had an amazing day wandering the forests with these beautiful giants. We learned a great deal about their behaviors and were able to spend a lot of time with them. There was no riding involved as this was strictly prohibited since it is not something that elephants enjoy doing – please keep this in mind before going here. The nice thing about this place is that the elephants can actually do what they want and are not forced to do things they don’t want to. 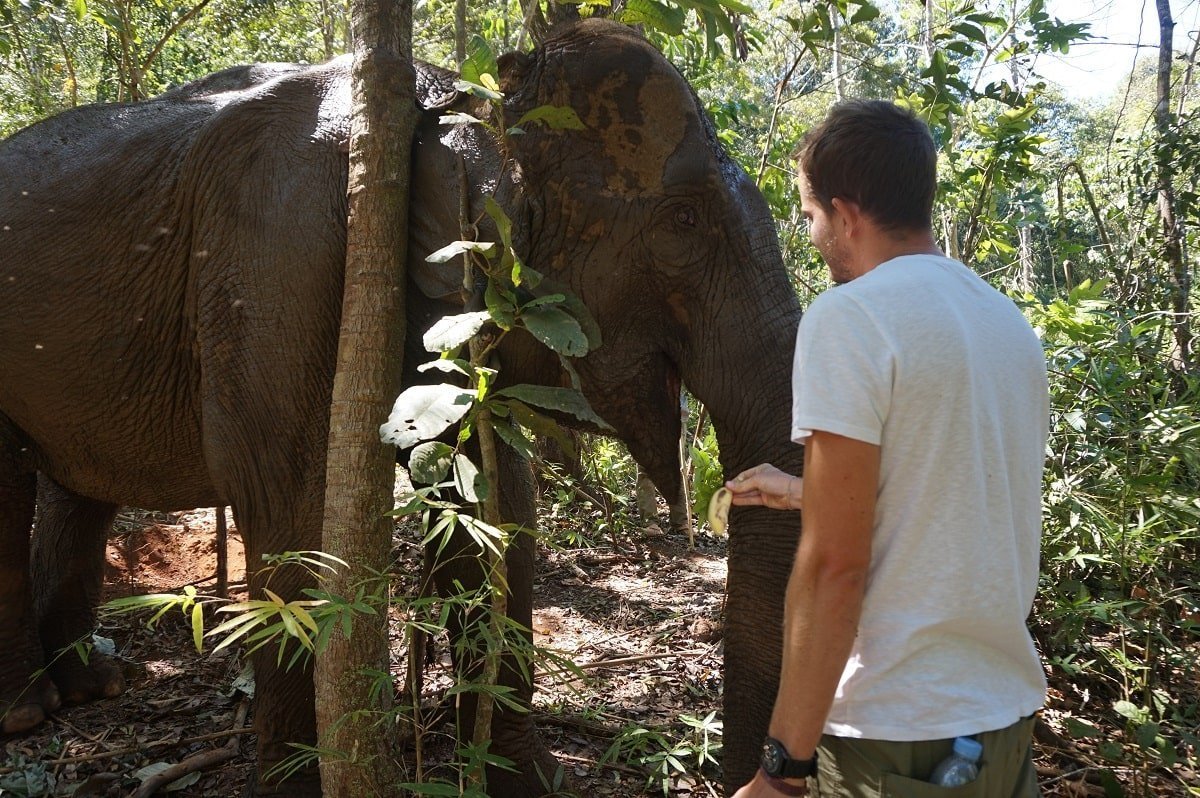 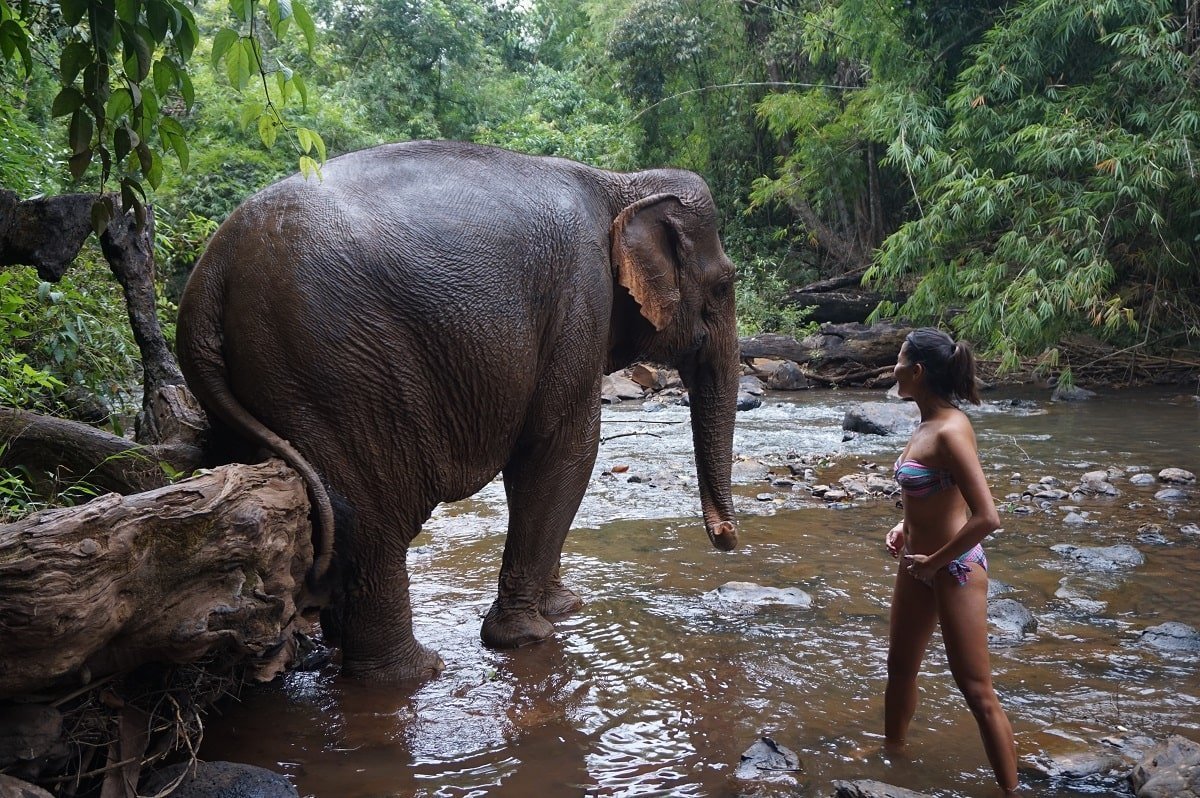 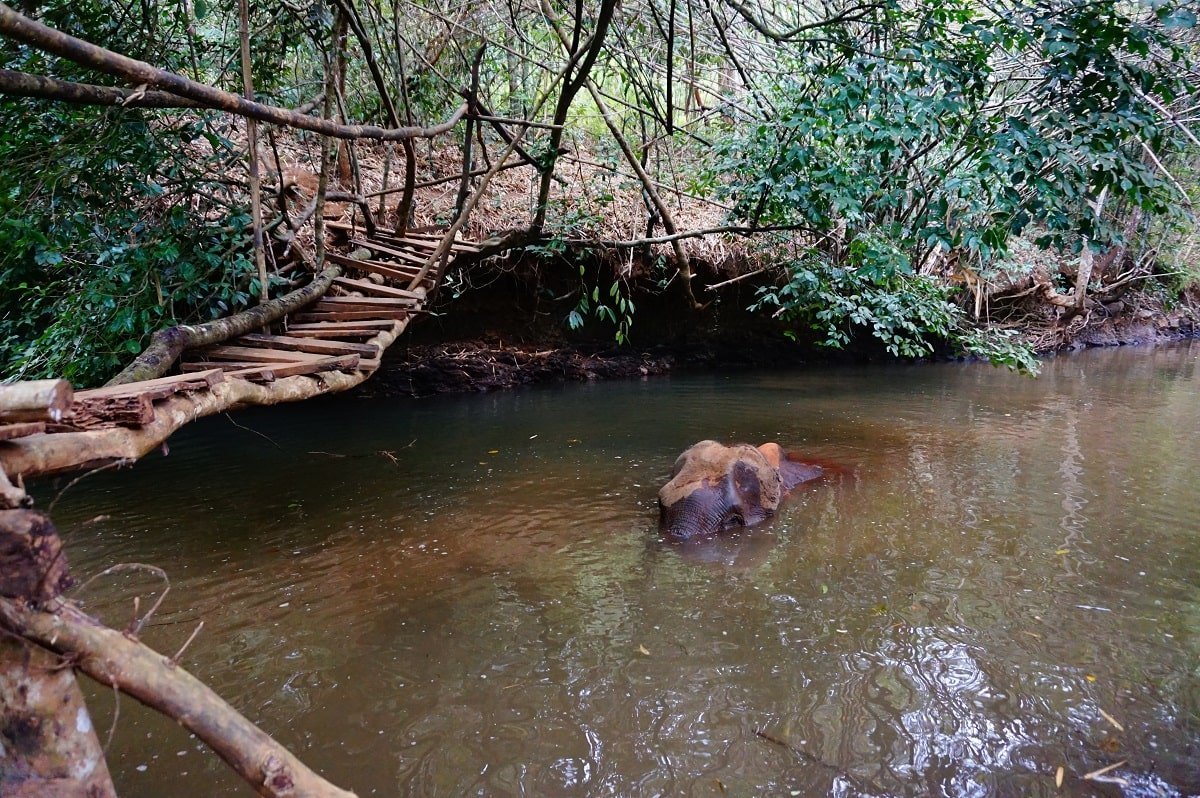 We spent the night in some neat hammocks (which was fun ;)), enjoying some great company and food and a nice view down into the forest. Along with a guide and another couple we walked through the jungles of Mondulkiri – discovering beautiful waterfalls, rivers and natural surroundings. We climbed hills, swam in small creeks, jumped off waterfalls, crossed rivers and learned a great deal about different animals, insects and plants along the way. It was quite tiring at times but it was worth the effort. The trek takes the entire day and we walked roughly 20 kilometers until we finally reached the village. Although it was not entirely comparable to some of the more intense hiking we did in Austria, the trek through the humid Cambodian jungle was definitely a sweaty experience!

The combination of being with the elephants as well as having the chance to experience the forests of Mondulkiri made our visit to this rural province a very special one. We really enjoyed this adventure and will keep the encounter with these beautiful elephants forever in our memories. If you want to experience a different part of Cambodia and escape the heat of the lower plains you should definitely take a visit to the Mondulkiri province. We had a good time joining the Mondulkiri Project and felt in good hands all along the way.

For your orientation, here a map of Mondulkiri province: