To see the mighty Orangutans in nature has always been a dream of us. Experiencing one of the most unique and intelligent (97 percent identical genomes to humans) primates up close in their, more or less natural habitat, has become reality for us when we visited the small town of Bukit Lawang in Sumatra, Indonesia. The town is known to be one of the largest animal sanctuaries for the Sumatran Orangutan and is directly located at the Gunung Leuser National Park.

Where is Bukit Lawang and how do I get there?

The town of Bukit Lawang is located in northern Sumatra, Indonesia. It is surrounded by thick forests and, unfortunately, also large plantations of palm trees which now take up much of the lands in that area. From Bukit Lawang to Medan Airport (which is the closest airport) will take you around 3 hours by car. There are various flights to Bukit Lawang through the Medan airport provided by many of the local Asian airlines such as AirAsia. We actually flew in from the island of Penang in Malaysia.

Booking a Tour to see the Orangutans

In order to see the Orangutans you will need to book a tour through one of the many providers located in Bukit Lawang. There are over 50 providers (or even more) that offer these tours that range from single-day trips up to one-week trecks throughout the area. After a research we opted to go for EcoTravel Bukit Lawang as they had great reviews and offered a complete package, including airport transfers. Said and done, we booked a 4-day tour (2 nights in the village + one night in the jungle) including the full tour with meals and transfers included. Bukit Lawang trecking prices can vary depending on your provider – we paid around EUR 170/person and it was worth it!

Where to stay in Bukit Lawang can be another challenge but since we took the all-inclusive package (which we highly recommend), that was taken care of already.

So after we got picked up by the driver at the airport, we arrived at our accommodation in Bukit Lawang. The rooms at the EcoTravel Cottages were very comfy and large. The hotel as such is beautifully located by the river and there is a small garden area to relax and eat.

We were greeted by the tour guide who immediately explained us about the tour the next day and what will happen. This is very good, as we have experienced many tours around Asia where you just get picked up and have no clue about what is about to happen. Overall, we were very excited as we had a similar treck to see the elephants in Mondulkiri, Camodia a few years earlier.

We got all our info, had some dinner up the river (Garden Inn), had a good nights rest and started the tour next morning. The tour group was consisting of 8 people in total which made it a bit easier for all of us in terms of logistics and communication. We crossed the river and headed for the entry of the Gunung Leuser National Park, which is were all the Orangutans can be found. The park is actually the largest wilderness area in Southeast Asia, offering protection to a wide range of ecosystems.

After a rather easy hike up until the entrance of the park the treck turned into a difficult and very vertical ascent. Our guides stopped at various locations and explained us important and interesting facts about the many species of animals and plants that can be found there. During the first three hours of the treck we saw many different animals, ranging from different monkeys such as the Thomas’s Langur & Gibbons as well as different birds and even turtles! But, there was no Orangutan in sight…

We realized our guides were getting a bit nervous as they usually always see them in the areas that we were hiking in. But somehow, on this day, we just did not see them.

Until we met another group of hikers and saw that one of the tourist was sitting on the ground with a Orangutan holding her firmly by the arm! It seems that the Orangutans in this area have associated this abnormal behavior with receiving food. The girl was a bit frightened, obviously, and the guides fed the Orangutan until it eventually let go and climbed back into the trees, well-fed!

We took the chance to take many pictures and continued our treck until we reached a small opening in the woods and had our Nasi Goreng lunch. It was nicely decorated within a banana leaf. After recharging our batteries and another 2 hours of intense up-and-downs through the jungle we finally reached our camp for the night. It was a small hut with tents underneath, beautifully located by the river bed. We enjoyed our well-deserved dip in the cold, fresh water and had an amazing dinner prepared for us by the guides. 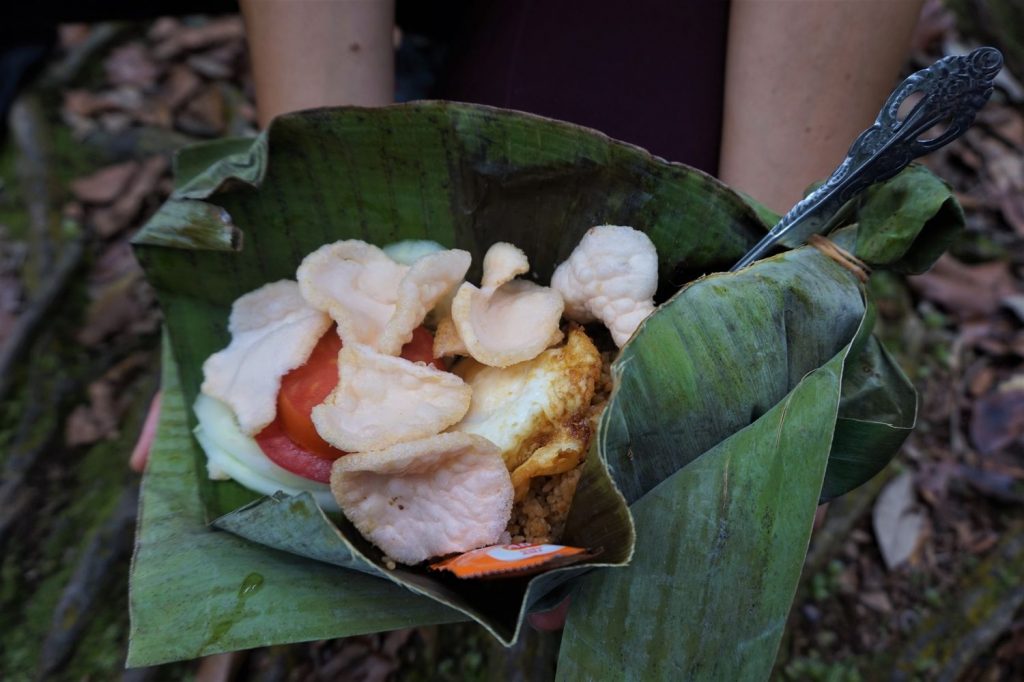 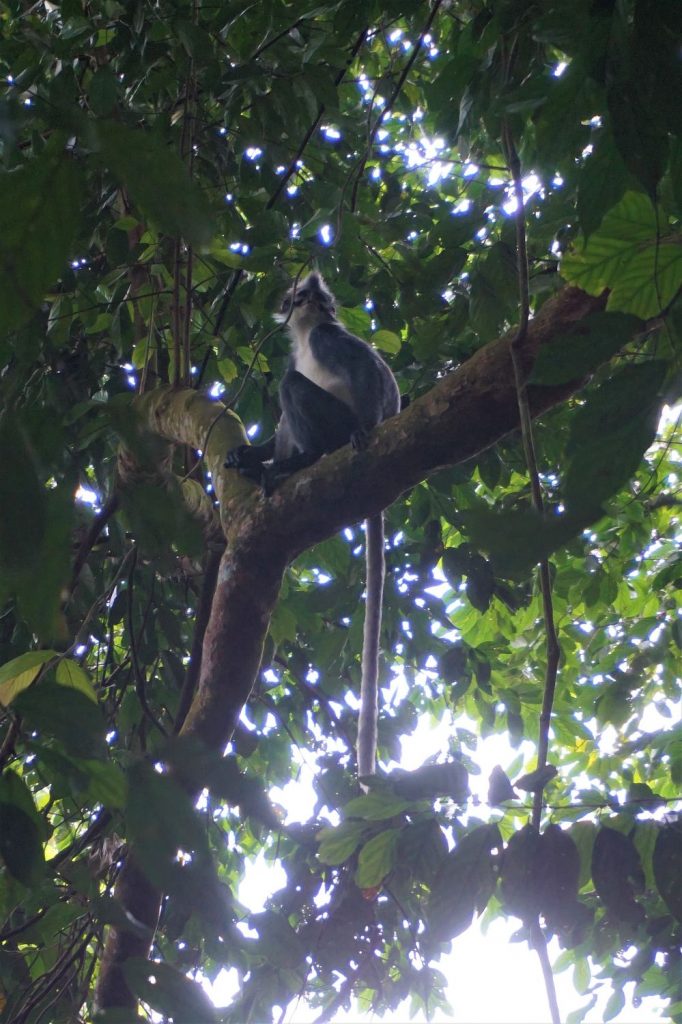 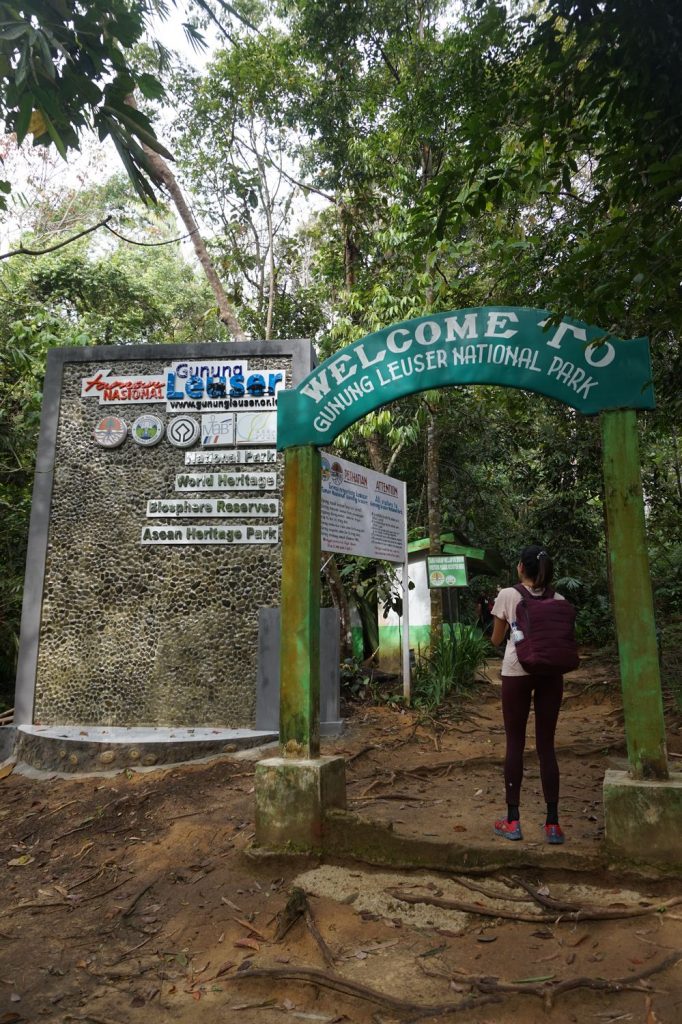 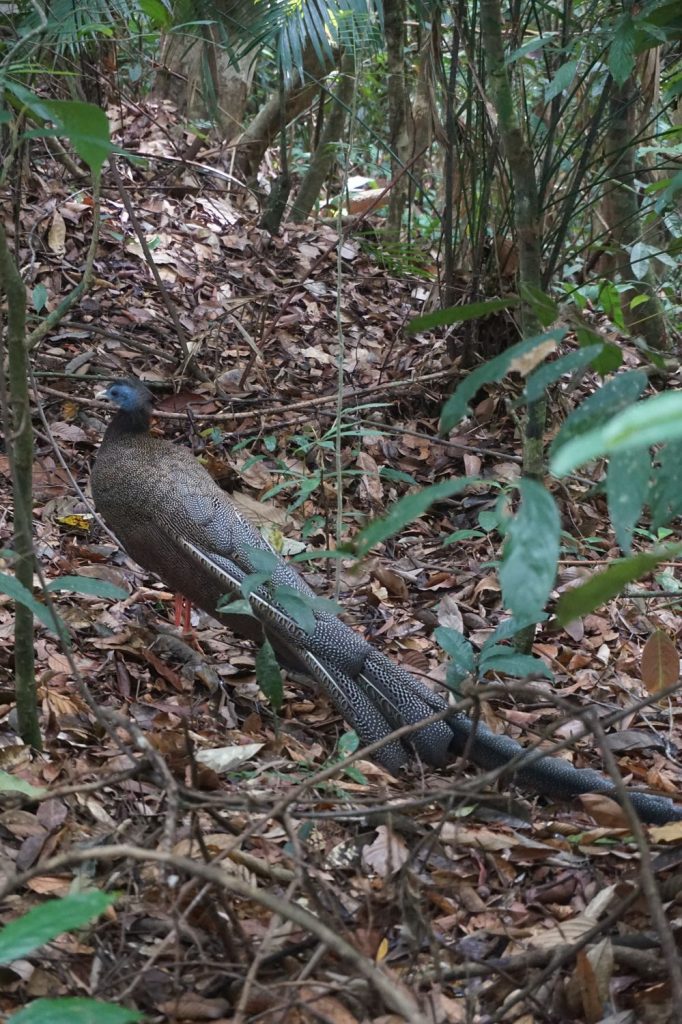 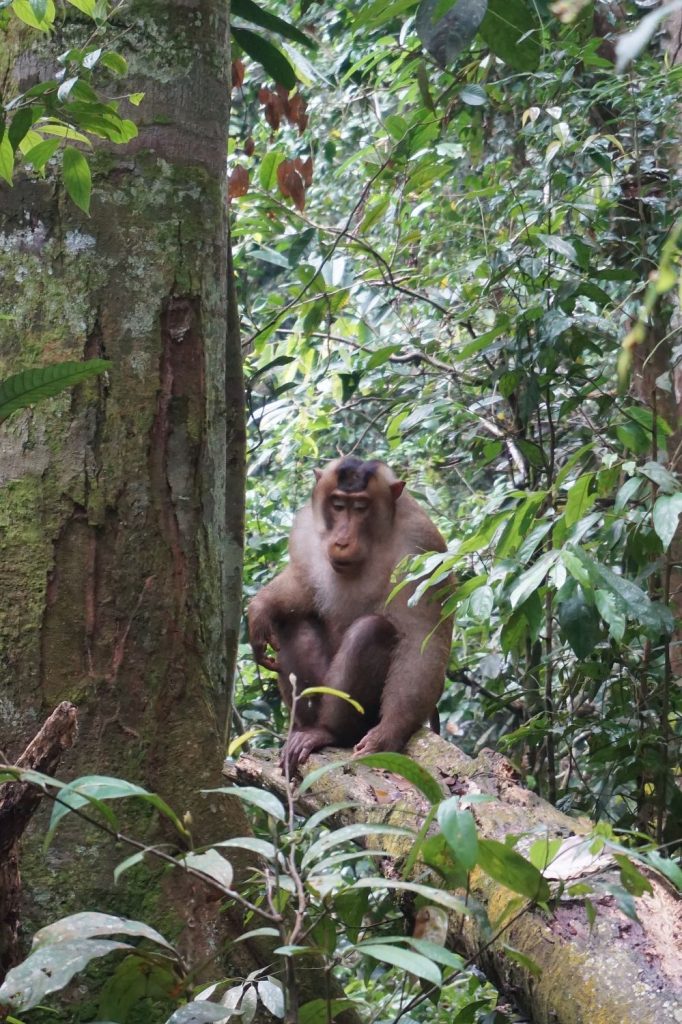 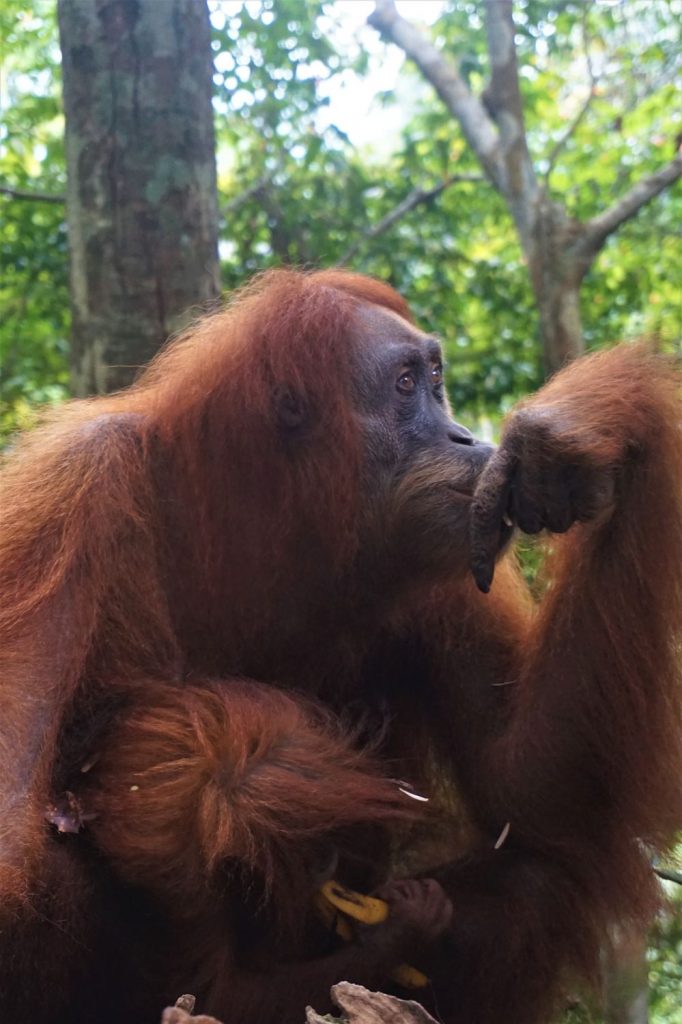 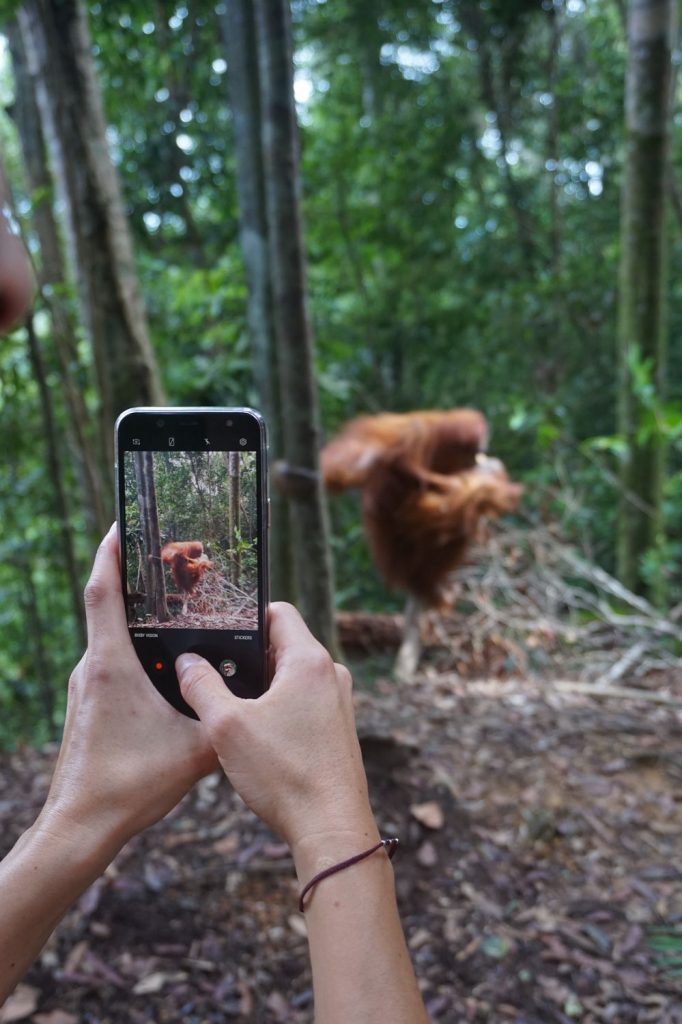 After a more-or-less restful night (hello jungle noises & camping comfort) we had a nice breakfast by the river. We then visited a smaller waterfall across the riverside and proceeded back to the village by rafting on large tires. This was a fun experience and a nice & joyful way to get back.

As we did not see that many Orangutans in the previous day we decided to take another, separate hike with our main guide back into the jungle to find our luck again spotting other Orangutans. Said and done, we were dropped off by the jungle a few hundred meters down the river. We then spent another hour trecking as we spotted another Orangutan mother and her baby in the trees! We had no other tourists around and spent a great time observing them.

We eventually proceeded back to the village of Bukit Lawang and enjoyed our afternoon at the hotel – swimming in the river included. 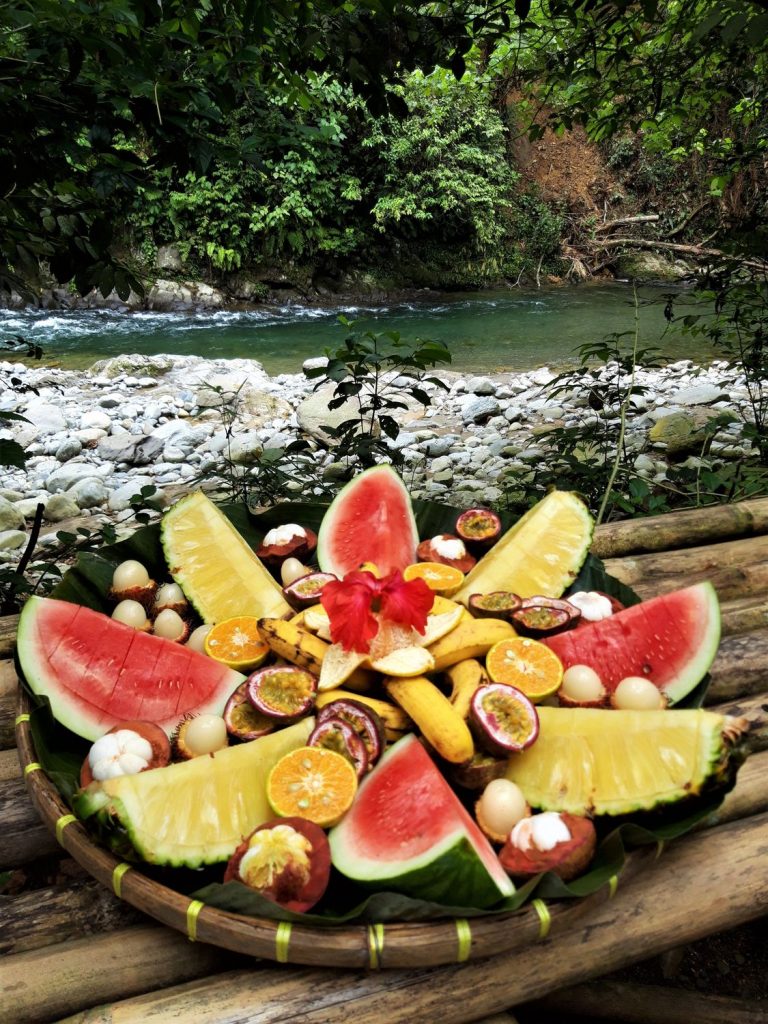 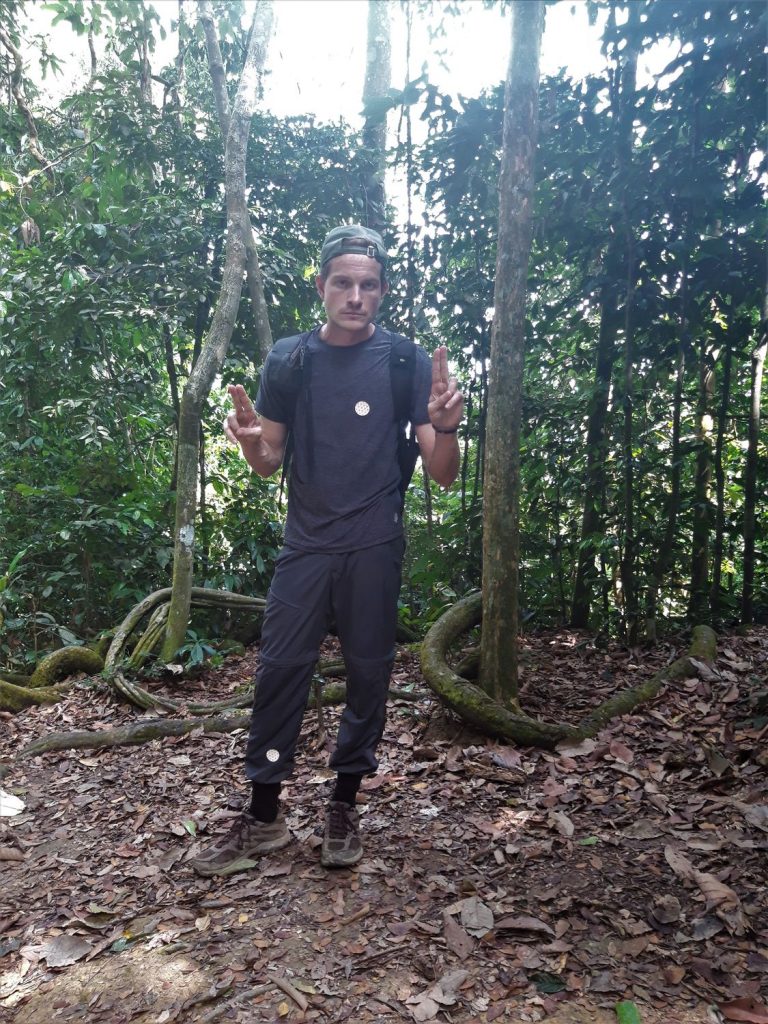 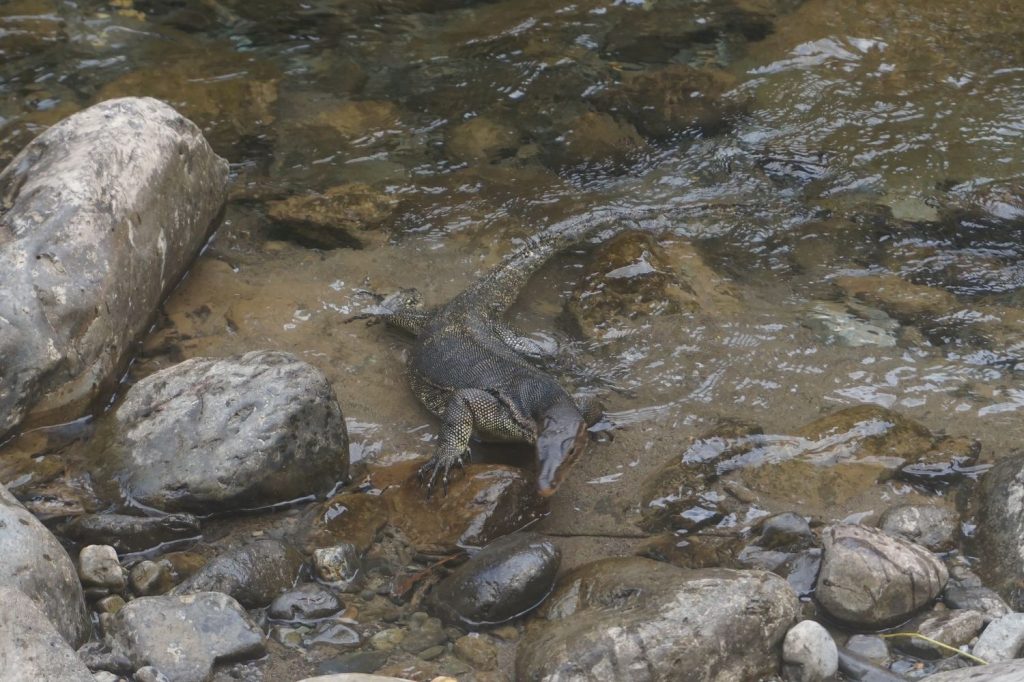 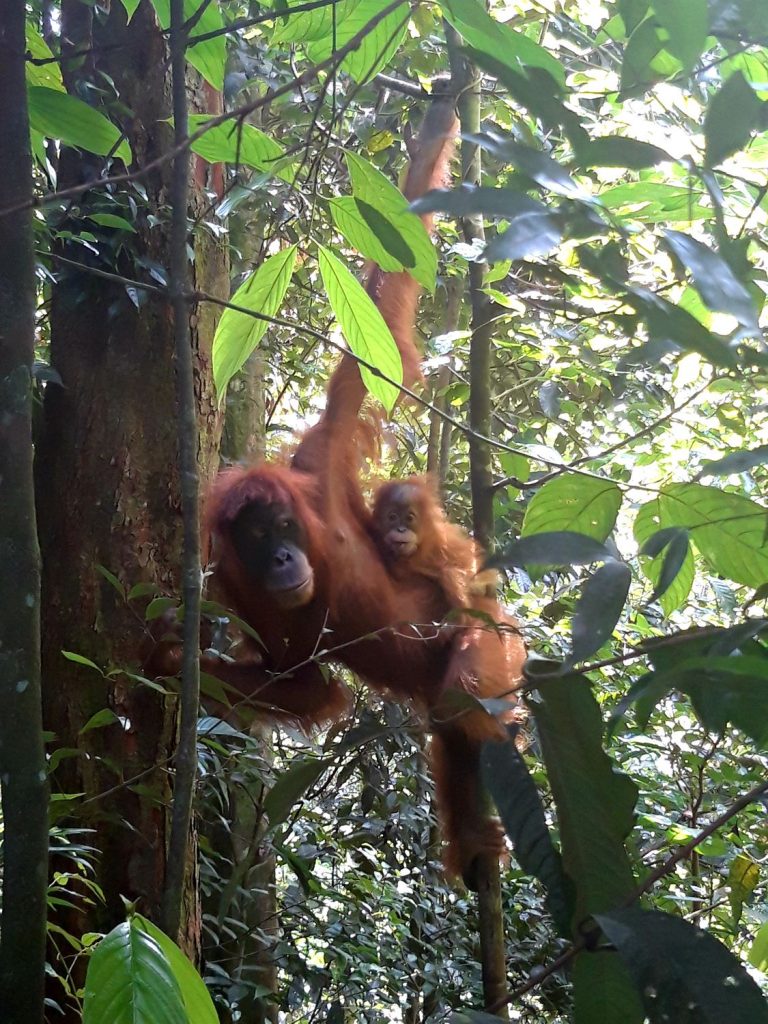 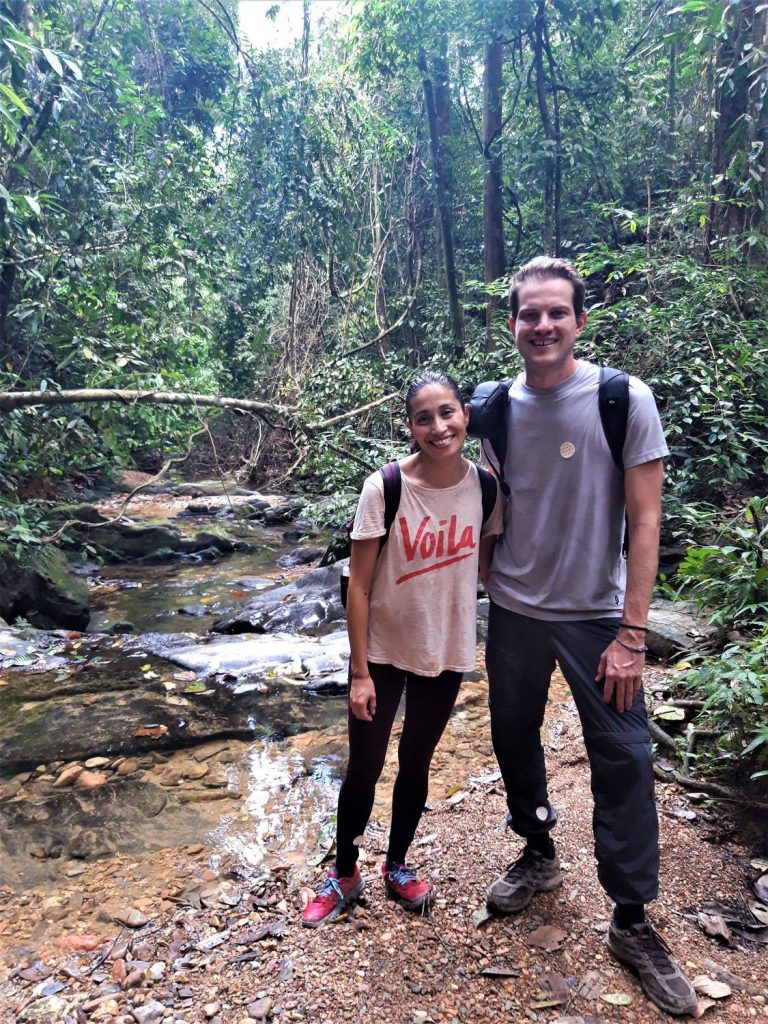 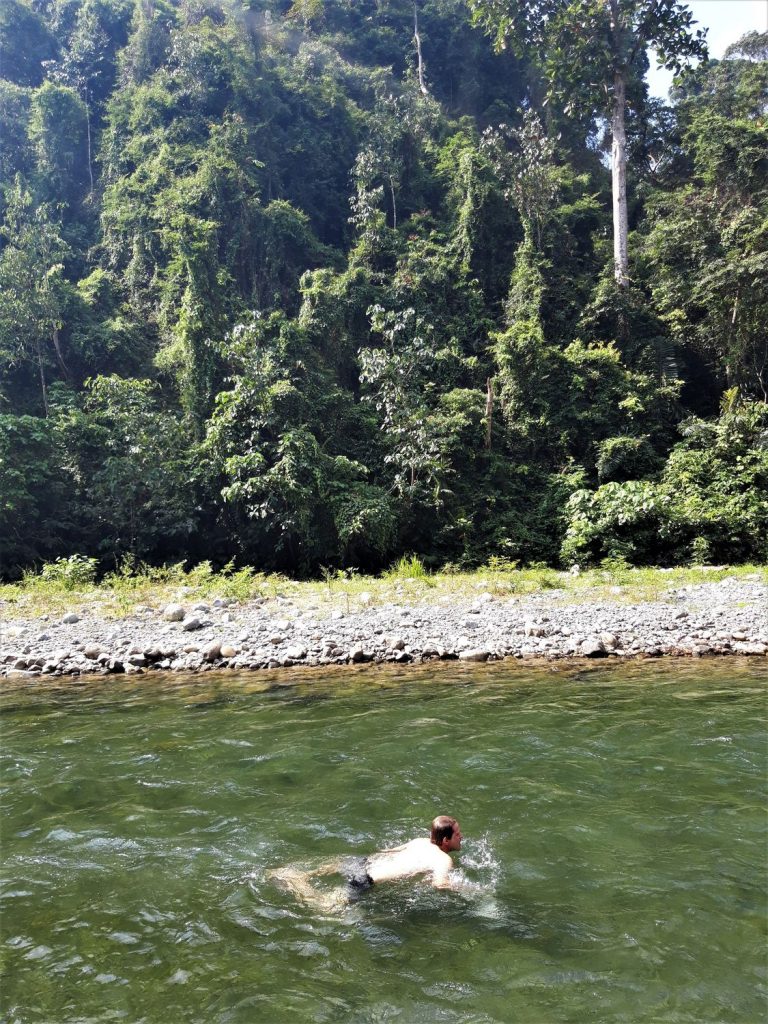 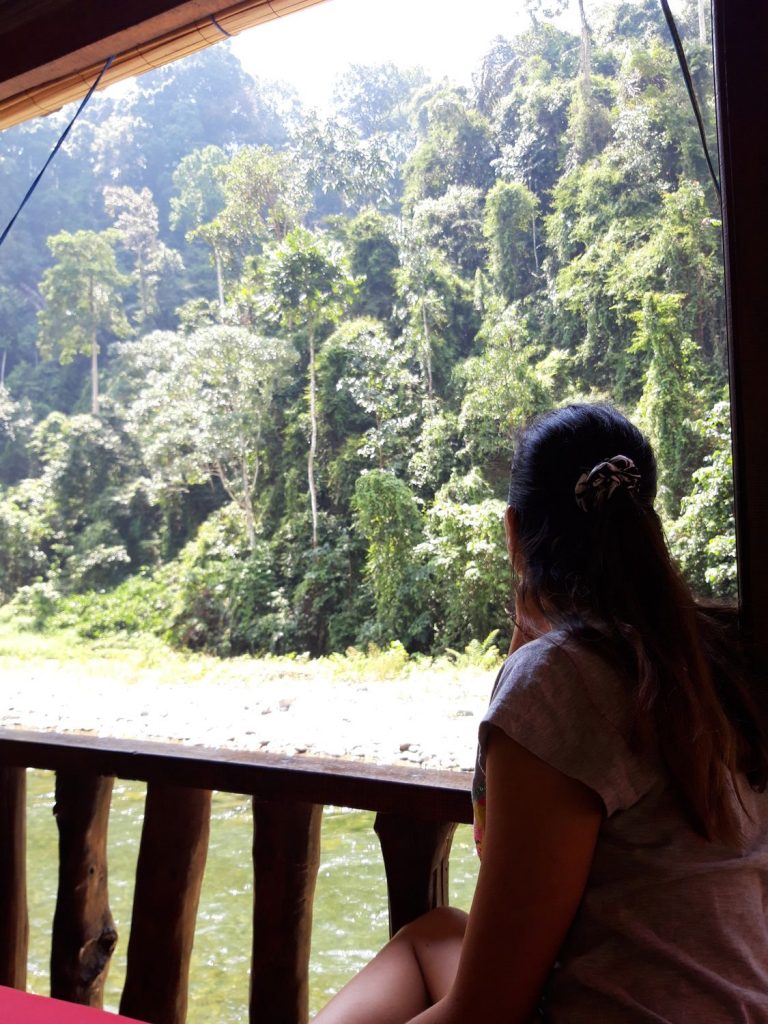 Things to know before you go

If you decide to do this jungle treck from Bukit Lawang you might want to consider these points:

Despite the actual treck being quite tiring we really enjoyed our 2 days in the jungle. It was a very nice and unique experience to be in a real Sumatran jungle and to see so many animals and of course the Orangutans up close. We do know that they are not fully wild and are still accustomed to human contact, hence making their behavior a bit unnatural. Nevertheless, with us being there and spending some money we can help to sustain this important eco-refuge for so many animals. So overall, we can definitely recommend this treck and would have even decided for a longer treck if we had the time. Also, we can absolutely recommend EcoTravel as a great option for not only the accommodation in Bukit Lawang but also their amazing guides that made our stay here a marvelous experience. 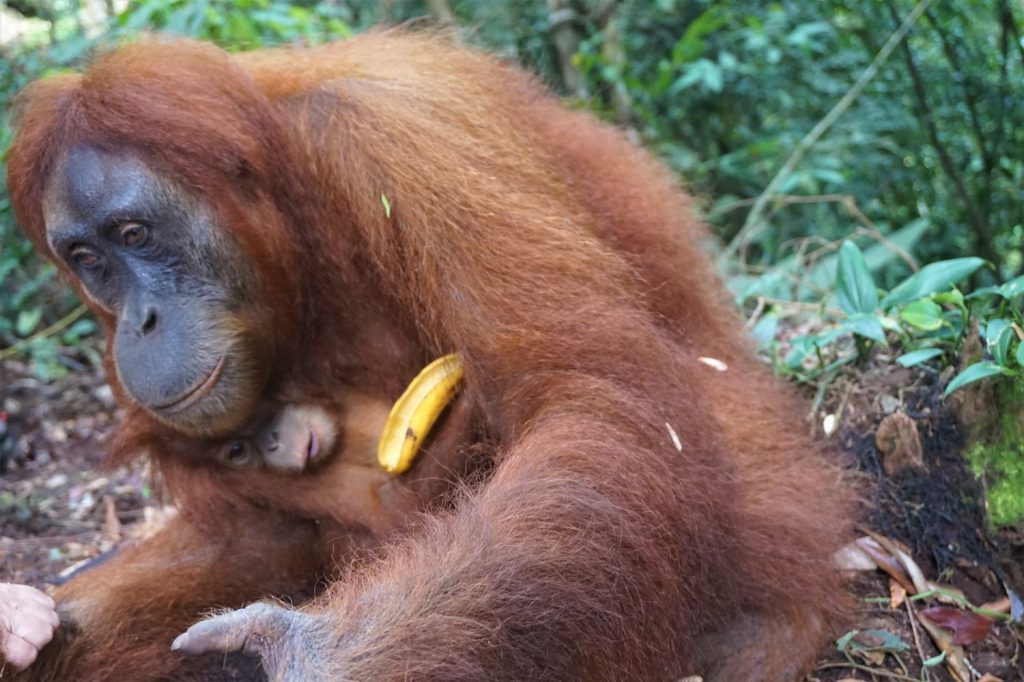