At first, we were not sure if this would be such a good idea. Yet, at second thought, we realized that this is probably the greatest way of exploring the country and we knew it would be a fantastic and memorable adventure. What exactly was the plan? Travel to Sri Lanka and discover the Island with a Tuk Tuk in just 10 days – not with a driver but actually driving it by ourselves!

Rocio, a good friend of ours (Mael) and myself arrived in Negombo and headed downtown to stay at our first stop of the trip. We found a nice little guest house and had a closer look at our plan. We had 10 days ahead of us and really wanted to see as much of this Island as possible. The following tour was the one we actually did travel and just differentiated a bit from our original plan as we had some short-term changes. Yet I believe it is a highly recommendable tuk-tuk tour to do and with a few more days you can even pop in a few more trips here and there. 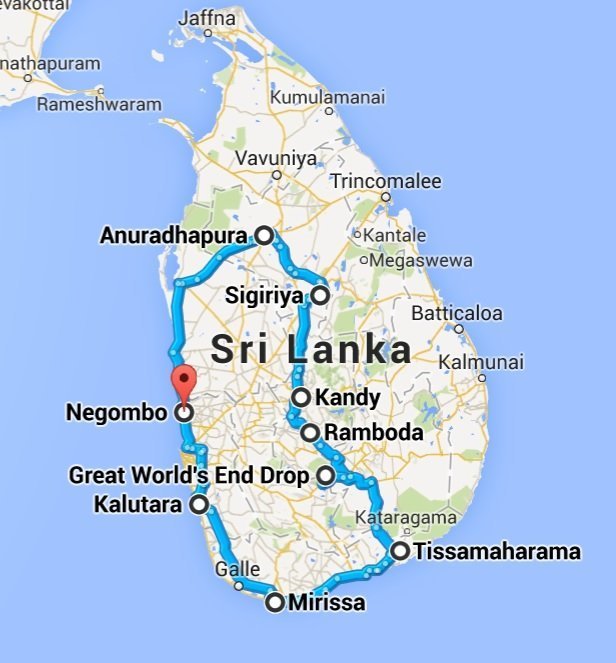 The plan was to travel up north no further than Anuradhapura, as the very northern part of the country is just recovering from 30 war-torn years. Also, it would not allow us to have more time to see the rest of the Island. After that, we wanted to go down south towards the country center as there are many cultural highlights to be discovered here. Following that go down south all the way, experience the nature in the national parks, enjoy the fantastic beaches and eventually head of north again to our starting point in Negombo.

From a friend of ours, who did a similar trip, we had a recommendation as to where to rent our Tuk-Tuk. The place is called Pick & Go Travels – here you can not only rent Tuk-Tuks but also cars, bicycles, and motorcycles. We contacted them prior to our trip and reserved the Tuk Tuk in advance. The owner, named Rocky (he did look a bit like Rocky Balboa but somehow seemed more like a Sri Lankan version of John Rambo) was very friendly and helpful. We signed the papers, paid the deposit (see details on their website and through email) and started a round of test driving. 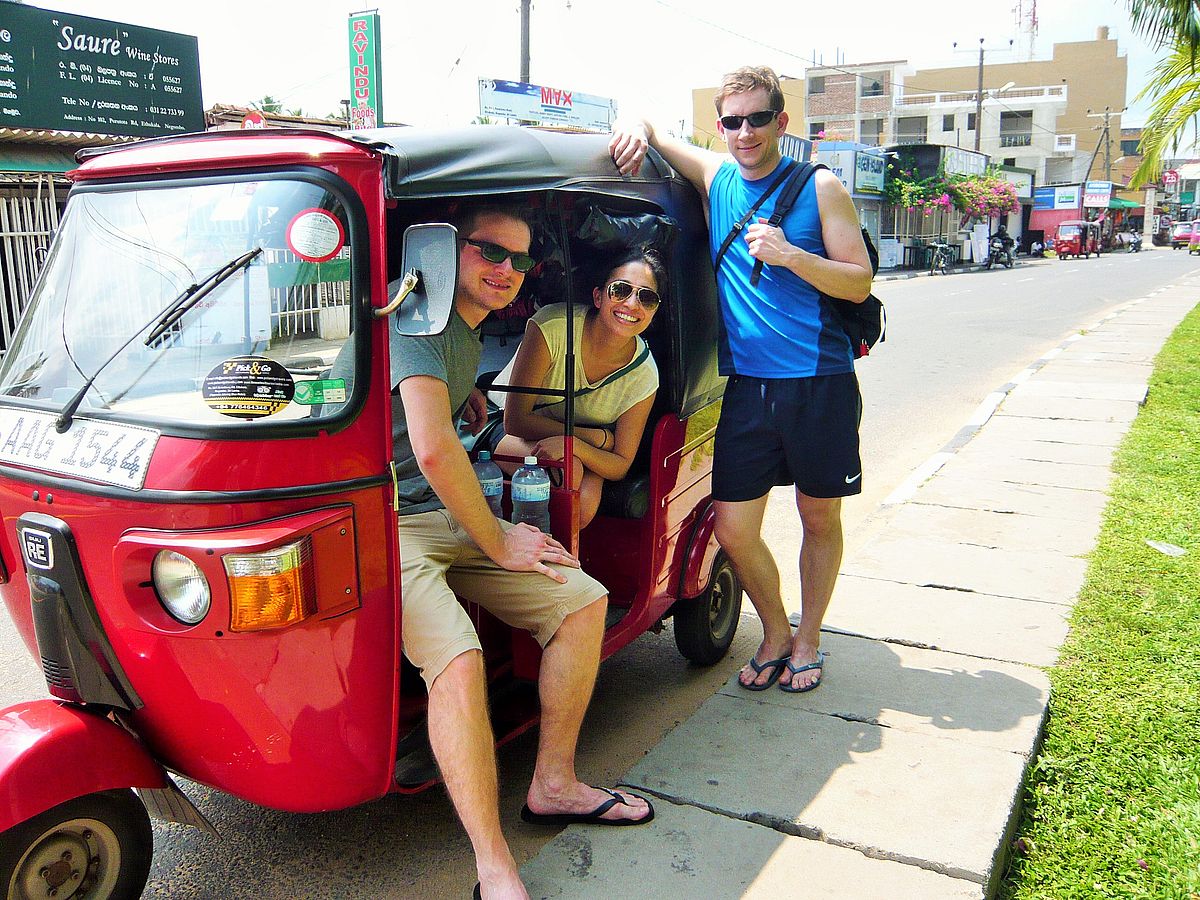 We now were ready to go and headed up the road towards Anuradhapura. The Tuk Tuk is good to transport 3 people – two in the back and one driver. We, therefore, had the chance to switch drivers along the way which made it easier to rest in between. Driving a Tuk-Tuk is fairly simple, yet you need to get used to the braking, shifting gears and accelerating.

Quite a long trip, roughly 175 km, and perhaps a bit more tiring than we expected. It took us a few hours to get there since we could not go much faster than 50 kph. The road was better than we thought but the long ride was definitely worth it. Anuradhapura was one of my personal favorites of Sri Lanka – have a look at post about 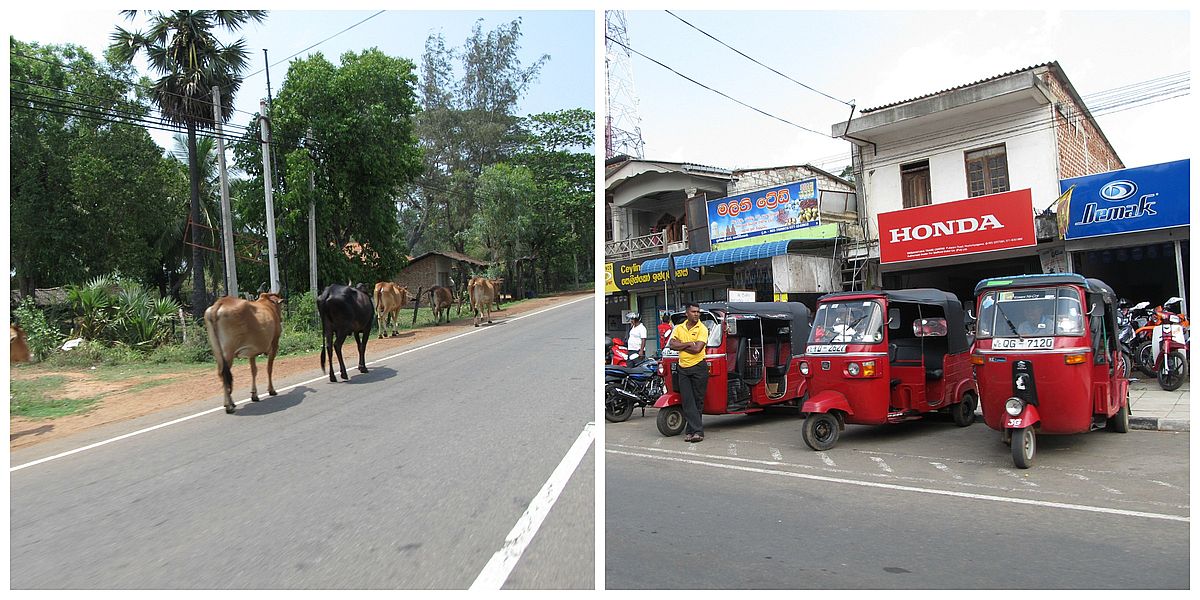 Day 3 – Anuradhapura to Sigiriya, then to Kandy

A shorter trip, roughly 80 kilometers to Sigiriya but a must-go on the journey. The road leads by some nice natural reserves and different lakes. Sigiriya is an impressive destination and we wanted to make full use of it. We started the journey quite early in the morning as we knew that we had no plans of actually staying in Sigiriya but continuing our ride all the way down to Kandy. It was yet another ambitious ride and, if the time allows, I would definitely stay overnight either close to Sigiriya or even drop by the city of Dambulla – which is famous for its cave temple and Buddha figures.

Nevertheless, we then continued down to Kandy as this would be our final destination of the day. The ride went through many smaller towns which slows down the pace a lot. The nature rides are very nice and calm but as soon as you reach a smaller town it begins with traffic and massive chaos. Just keep calm and drive focused and slowly! 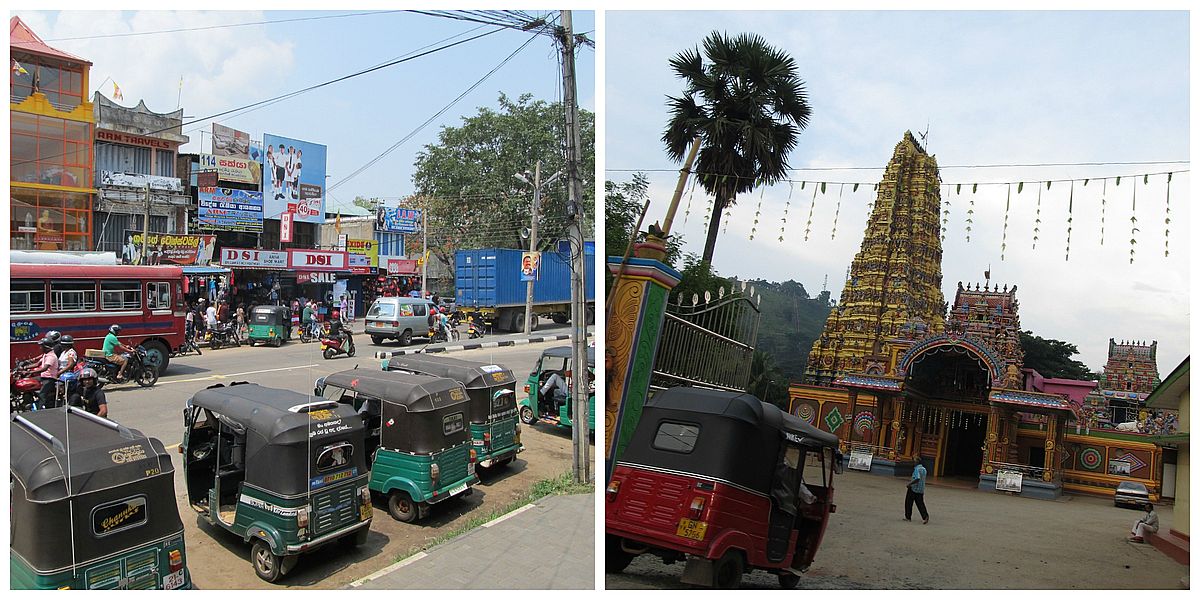 After a short stay in Kandy we moved on further down south. As we learned our lesson from our previous, ambitious trips, we now wanted to take it a bit easy and stop over Ramboda in between. Ramboda was recommended to us by a local tour guide in Kandy and we eventually stopped there and enjoyed a nice break in the middle of the country with waterfalls and tea plantations. A very nice area as well and definitely a nice stop-over place. Highly recommendable is to stay a night in the Ramboda Falls Hotel with a direct view on the waterfalls.

Wow!What a trip and what a day!Indeed another long ride but we experienced a very different side of Sri Lanka. We started very early in the morning, around 4 or so. It was recommended to see the World’s End not later than 9 as the clouds begin to fall in there and the view would be blocked. The road took us up the mountains and it got steeper and steeper and we proceeded. Also, the temperature dropped to around 10 degrees!This was quite a shock as we were used to much warmer temperatures where we were before and we now even had to wrap ourselves in towels and blankets to keep us warm.

The steep road got VERY steep as we headed up to see the edge at the Worlds End. It seemed at times that the Tuk Tuk would not manage but I was surprised how consistently it pushed us up that mountain. The nature was quite impressive as it resembled strongly to a European landscape. We made it all the way, did the Worlds End (roughly 3-hour march) tour and continued down to Tissamaharama. 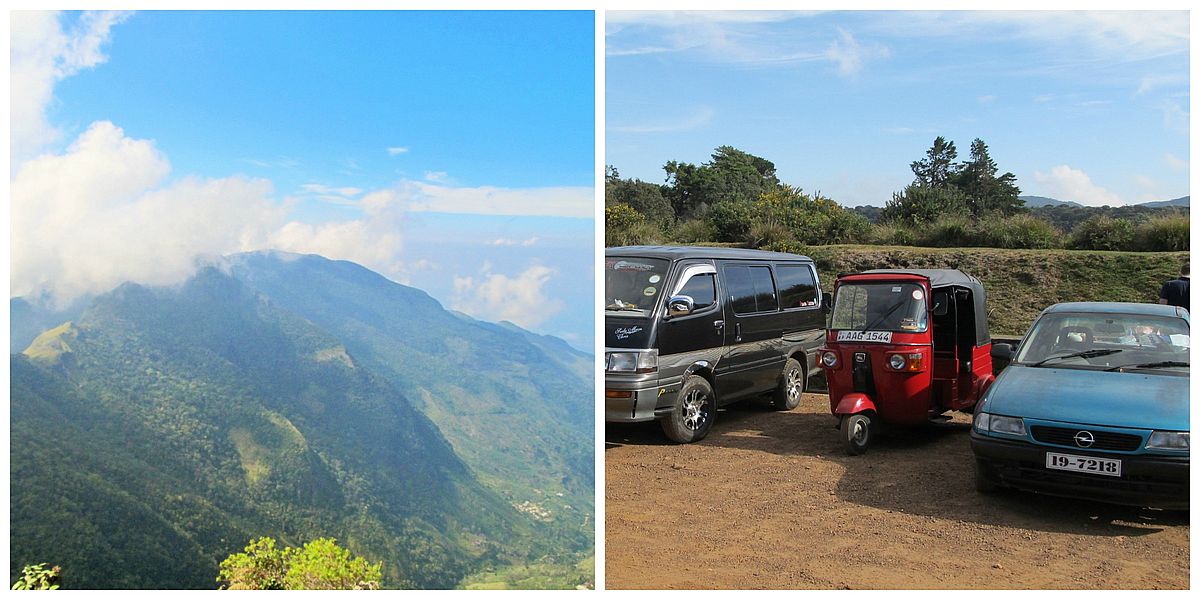 We stayed in a very nice guest house called Elephant Guest House – a very friendly family-run guest house with lots of love and great food! After having visited the city, the temples of Kataragama and the Yala National Park we moved on down again to reach the beautiful beaches of South Sri Lanka. Specifically, we went down the see Mirissa, one of the nicest places in that area. A very nice place to relax by the sea and enjoy one of the many restaurants and bars along the beach. 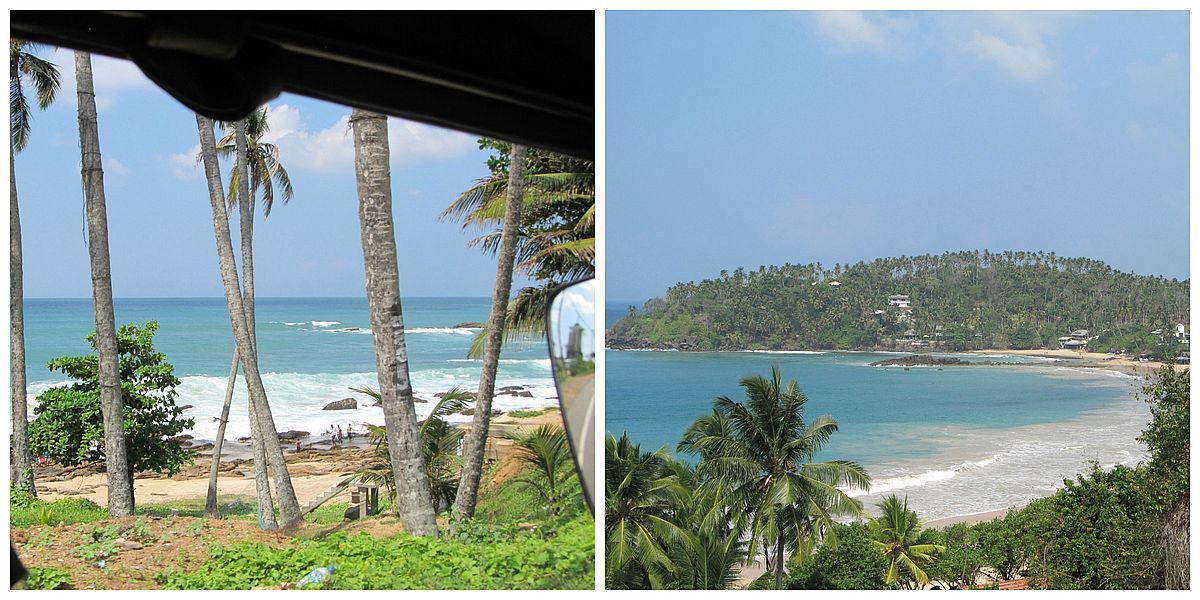 We really enjoyed staying in Mirissa and, in retrospect, should have stayed there much longer. To avoid a very long-distance last-day Tuk Tuk ride we decided to head up north again and do a stop-over before we hit back to Negombo. We heard of a nice hotel close to the city of Kalutara, on a small peninsula of the coast. It was nice to relax for a view days before heading back home yet we realized that a nice upper-class hotel cannot give the satisfaction that a loving guest house does. Anyhow, we had a nice time and headed back to Negombo the next day.

Last day on the road. A bit sad, since we could have continued traveling for much longer, but time was unfortunately up. We moved up the coast and somehow managed to pass by the city of Colombo. Definitely not the nicest ride of our trip but it has to be passed before we could get back to Negombo.

I hope I was able to motivate and encourage you as a reader to also take the opportunity and travel through this marvelous country with a Tuk Tuk. The route we took is a suggestion of how to see many parts of the country in a relatively short time. Obviously, I would have loved to stay longer and discover some more parts of the island. In general, I believe that it was nicely divided, though, allowing us to see the different facets of this beautiful country. It was one of the best adventures I had in a long time and I would highly recommend for any adventurous Sri Lanka traveler to do the same. Take a Sri Lanka Tuk Tuk ride that you will never forget!